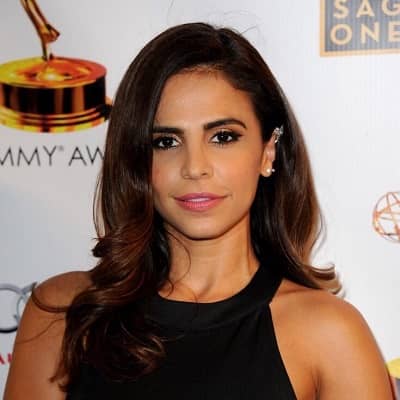 Azita Ghanizada is currently possibly single. She has not disclosed her relationship and affair.

Previously, she was in a relationship with actor Matthew Davis in 2012. After the affair of 3 years, this couple split up in 2015.

Azita was also rumored to be dating Mel Gibson.

Who is Azita Ghanizada?

Azita Ghanizada is an Afghanistan born American actress and producer. She is popular for playing the character of Chiara in a short film A Kiss on the Nose.

This actress was born on 17 November 1979, in Kabul Afghanistan. Her father used to work in the US embassy in Tehran, Iran and her mother spend much of her life in India and was highly influenced by Bollywood.

From Azita’s father’s work, their family got opportunities to travel different countries. Her life in America began at a political asylum to escape war-time conflicts.

The actress learned most of her English watching American shows. She attended Madison High School. She graduated with a Bachelor’s degree in English and Journalism from Virginia Tech.

Ghanizada belongs to Asian descent and holds US citizenship.

Earlier, Azita Ghanizada was not allowed to pursue her career as an actress until she finished her studies because of a conservative multiracial home. Her mother’s love for Hollywood and Bollywood movies inspired her to become an actress.

After her graduation, she moved to Los Angeles to become an actress. Afterward, she began her career by guest appearing on famous TV shows and working in television commercials.

Azita has enabled herself as a chameleon on TV because of her multi-ethnic appearance.

In 2004, she made her movie debut with a short film A Kiss on the Nose as Chiara, from which she gained huge popularity.

Her notable guest-starring roles on television include How I Met Your Mother, Veronica Mars, Entourage, The Mentalist, Psych, Ghost Whisperer, and more.

Afterward, she made her appearance on NBC’s comedy telemovie Ellen More Or Less. Later in 2019, she starred in a television series Ballers and then appeared on REO Speedwagon’s album ‘Good Trouble’.

Her other television works include Numb3rs, Castle, The Wedding Bells, NCIS: Los Angeles, Friend with Benefits, Major Crimes, I Love Dick, Elementary, and 9-1-1.

In addition to television, Azita has marked her career in films also. She has starred in several movies including X’s O’s, ‘You, Only Better’, Blood Shot, Complete Unknown, and The Friend.

Recently, she is working on the production of Kevin Smith’s feature film ‘Killroy Was Here’.

Ghanizada founded MENA Arts Advocacy Coalition (MAAC) in 2016. She is working as an advocate on behalf of Middle Eastern North African (MENA) and South Asian performers.

MAAC member and Azita spent two years influencing SAG-AFTRA to include MENA as its own diverse category in the producer’s theatrical contracts.

Their advocacy worked proved successful and a new diversity category was introduced in 2017. The next year PrimeTV presented the first study on MENA performers by MAAC.

The average salary of an actor in the US is $52,000. Meanwhile, according to some sources, she has an estimated net worth of $1 million.

Azita and actor Met Gibson was rumored to be dating. The two were seen kissing each other while out for dinner in LA.

However, neither of them has said anything about this.

Azita Ghanizada is 5 feet 5 inches tall and weighs 58 kg. Likely, she has black hair and light brown eyes. Her shoe size is 8 US.