Aziz Ansari is an American actor, comedian, and writer. He is best known as Tom Haverford on the WBC series Parks and Recreation. He is dating Serena Campbell.

Aziz Ansari is in a relationship. He is dating a Danish physics student Serena Campbell.

Previously, he was dating a professional chef Courtney McBroom in 2014 but they split after two years. 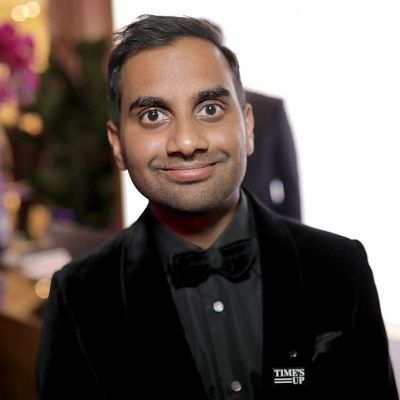 Do It Under the Influence Yourself! That's what we're shooting for! Get drunk and make your dreams come true.

A lot of people my age think to stand up sucks.

Who is Aziz Ansari?

Aziz Ansari is an American actor, comedian, and writer. He is best known as Tom Haverford on the WBC series Parks and Recreation.

This actor was born on February 23, 1983, in Columbia, South California, the United States as Aziz Ismail Ansari. He belongs of Asian descent.

His father’s name is Shoukath, a gastroenterologist and his mother’s name is Fatima Ansari, an obstetrician, and gynecologist. He has a brother named Aniz.

Later, he graduated with a Bachelor of Business degree in marketing from the New York University Stern School of Business in 2004.

Earlier, while attending the University, Aziz Ansari began his career-performing comedy. He performed at the Upright Citizens Brigade Theatre as well as weekly shows such as ‘Invite Them Up‘.

An American monthly ‘Rolling Stone‘ included him in their annual ‘Hot List’ in 2005. He won the Jury Award for ‘Best Standup’ at HBO’s 2006 U.S Comedy Arts Festival in Colorado.

Ansari collaborated with fellow comedians Rob Huebel and Paul Scheer, as well as director Jason Woliner to make short films. The first series created by this group was ‘Shutterbugs‘ which was followed up by ‘Illunionators‘. Aziz was announced as the first cast hire for WBC’s comedy ‘Parks and Recreation‘ in 2008.

He was the main character of the show for seven seasons. He gained huge popularity and received praise from critics for his role as ‘Tom Haverford’ in this Sitcom.

Afterward, he appeared in the Netflix original series ‘Master of None‘. James Poniewozik called the show the year’s best comedy straight out of the gate. Aziz’s performance in ‘Master of None‘ earned him a nomination for the Golden Globe Award for Best Actor-TV Series Musical or Comedy.

This series earned four Emmy nominations in 2016. Ansari and director Yang won the Emmy for outstanding writing for a comedy series for the episode ‘Parents’. They were also honored with a Peabody Award in May 2016.

Ansari hosted the 2010 MTV Movie Awards and the show opened with a spoof of the film ‘Precious‘ with Aziz appearing as Aziz ‘Precious’ Ansari. He is also the first Indian person to host ‘Saturday Night Live. This actor made a cameo appearance in the music video ‘Ottis‘ by Jay Z and Kanye West.

In addition to television, he has also starred in several films including ‘Get Him to the Greek’, ‘I Love You’, ‘Man’,’30 Minutes or Less’, ‘This is the End’, ‘Funny People‘, and more. Among various acting commitments, Aziz has continued performing and touring as a stand-up comedian.

He released his book ‘Modern Romance: An Investigation, on June 16, 2015. This book was written by sociologist Erick Klinenberg and is about the comedic pitfalls of dating in the modern world.

According to Forbes, the salary of Aziz is $9.5 million and he was among the 10 highest-paid comedians. Meanwhile, according to some sources, he has an estimated net worth of $20 million as of 2022.

A woman accused Aziz of sexual misconduct in an article on Babe.net by Katie Way in January 2015. He stated that the encounter by all indications was completely consensual.

But critics have stated that these actions were misogynistic, lacked affirmative consent, and harmful to male expectations.

Aziz Ansari stands 5 feet 6 inches tall and weighs 62 kg. His shoe size is 9 US. Likely, he has black hair and dark brown eyes.