Previously, she was dating an actress Raven Symone. This couple introduced their relationship to the public in 2015. Later that year, they announced that they have ended their three years of relationship. 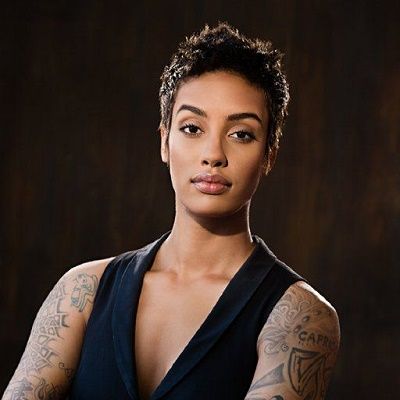 I took a break when I was younger because it didn't pick up as much.

AzMarie Livingston is an American DJ, model, singer, and actress. She is best known for appearing in America’s Next Top Model: British Invasion in 2012.

This model was born on December 28, 1986, in California, the United States with the birth name Ashley Marie Livingston. She was raised by her single mother. Her father was a proud homosexual. She described her parent’s relationship as best friends.

Az attended Nicolet High School in Wisconsin. Her interest in modeling began after she traveled to Los Angeles with her father at age nine. She came out as bisexual when she was 14 years old.

Marie attended the University of Wisconsin-Whitewater. Later, she dropped out after three-semester and moved to LA to pursue her career.

This model started her career as a runway model in New York and LA. She appeared in several magazines from 2009-to 2011. She also participated in several fashion shows including BET’s Rip the Runway, and London Fashion Week. Az catches the public eye s a participant in America’s Next Top Model: British Invasion in 2012.

AzMarie Livingston is famous for her tattoo and androgynous look. She is currently playing a character in Fox’s Network hit show Empire.  Earlier, she appeared in the award-winning movie ‘Precious‘.

Livingston appeared on TV shows like The Real Housewives of New York City and ‘The Jacksons: A Family Dynasty’ in 2010. Afterward, she starred as Ricki on the gay television series DTLA.

Later, she appeared in the romantic comedy ‘Almost Amazing’  directed by Justin Price. Marie started out as an extra in several music videos including ‘Motivation’, Moment 4 Life before starting her solo music career. Her debut single named Morning Guarantee was released in 2012. She released her debut EP HipPopMedolicPoetry on August 31, 2014.

The average salary of a model in the United States is $48,000. Meanwhile, according to some sources of 2022, she has an estimated net worth of $1 million.

There is no rumor or controversy about this model. Meanwhile, she has managed to keep herself out of rumors and controversy. She is doing well in her career.