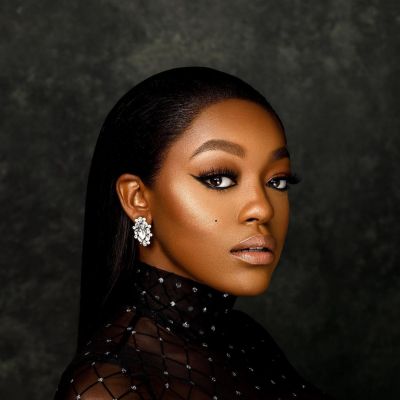 Azriel Clary has kept her current relationship status secretive. According to her Instagram bio, she is already engaged but she hasn’t disclosed it in the media.

Talking about her past relationship, Clary has a long-time affair with her then-boyfriend R. Kelly, a singer, songwriter, and record producer.

Who is Azriel Clary?

Azriel Clary is a singer from the United States. She is best known as the former girlfriend of the musician and producer, R.Kelly.

At present, she has garnered the attention of the media after her ex-boyfriend was found guilty of sexual misconduct and abuse.

In 2019, she was the one who defended the disgraced R&B singer, Kelly. At that time, she forcefully denied allegations of sexual abuse in an interview with CBS News.

Azriel was born to her parent’s Alice Clary (mother) and Angelo Clary (father). The birth date of Azriel was on the 30th of December 1998.

According to her birth date, she is 22 years young as of 2021. The singer has a sister named A’lceis Clary. Her academics background are under the curtains at the moment.

Further, she holds an American nationality whereas she belongs to African-American descent.

It is a documentary detailing sexual abuse allegations against American singer, R.Kelly aired on Lifetime from January 3 to January 5, 2019. The Documentary was Lifetime’s highest-rated program in more than two years, with 1.9 million total viewers.

During the time, the civil rights activist uncovered much of Kelly’s controversial past.  Clary and Kelly’s other girlfriend, Joycelin Savage defend him at that time. Also, she even accused her dad of being manipulative during an interview with Gayle King on CBS This morning show.

In a recent interview with King, Clary clarify that the singer had control over her in March 2019 that’s why she support him at that time.

One of the former girlfriends of R.Kelly, Joycelyn allegedly abused Azriel when she was live on Instagram. The two got into the fight in Kelly’s apartment in the Trump Tower and also Savage allegedly physically attacked her.

The singer has a well-maintained body physique. Talking about her physical appearance, she has a dark complexion. Likewise, she has a stunning black pair of eyes and as well black hair.

She stands at the height of 5 feet 5 inches tall. Her weight and other body stats are still under review.

Azriel has an estimated net worth of around $400 thousand as per other online sources. Further, her salary and other earning are still under review.

Moreover, she is active on Tiktok with over 3.9k followers. She has a self-titled YouTube channel where she has nearly 58.4k subscribers.