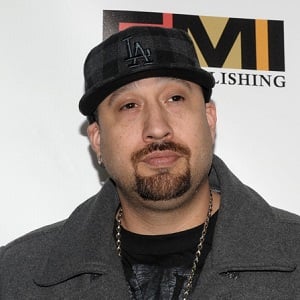 Louis Mario Freese (B-Real) was previously in a relationship with actress Carmen Electra. The pair were together from 1995 to 1996.

At present, Freese is believed to be married. He exchanged vows on August 8, 2008. But the name of his wife is not disclosed.

This couple together has a daughter who was born in 2010.

Louis Mario Freese (B-Real) is an American rapper and actor. People mostly recognize him as the lead rapper in the hip-hop group ‘Cypress Hill’.

Additionally, he is also one of two rappers in the rap-rock supergroup ‘Prophets of Rage’.

Freese was born as Louis Mario Freese in Los Angeles, California on June 2, 1970. When he was five years old, he moved to South Gate, California along with his sister and mother.

He developed a keen interest in the world of music, especially rapping since his childhood years. He is of American nationality. Furthermore, he belongs to a mixed ethnic background of Mexican and Cuban.

Talking about his education, Freese attended Bell High School but later dropped out.

B-Real became an active member of the ‘Family Swan Bloods’ after befriending future ‘Cypress Hill’ members Sen Dog and ‘Mellow Man Ace’. Since then, Freese has been a part of ‘Cypress Hill’.

The group has released several albums including ‘Black Sunday’, ‘III: Temples of Boom’, ‘IV’, ‘Skull & Bones’, ‘Stoned Raiders’, and ‘Till Death Do Us Part’ among others. With ‘Prophet of Rage’ he has released the studio album ‘Prophets of Rage’.

Apart from his career in music, Freese has also appeared in several movies and television series including ‘The Church of What’s Happening Now’, ‘TripTank’, ‘Project x27’, ‘Shade’, ‘Pauly Shore Is Dead’, ‘How High’, ‘MacArthur Park’, ‘Thicker Than Water’, ‘Winner Takes All’, ‘The Meteor Man’, and ‘Who’s the Man?’.

He has not revealed his current salary. However, he has an estimated net worth of around $7 million at present.

Although Freese’s lyrics have sometimes been criticized, he has successfully kept his career away from any notable controversies to date. At present, there are no rumors concerning his life and career.

Talking about his body measurement, there are no details available on B-Real’s height and weight. His hair color and eye color is dark brown.

Also know more about the early life, career, net worth, relationships, and controversies of other rappers like Eminem, J Cole, Nicki Minaj, Drake, and Cardi B.