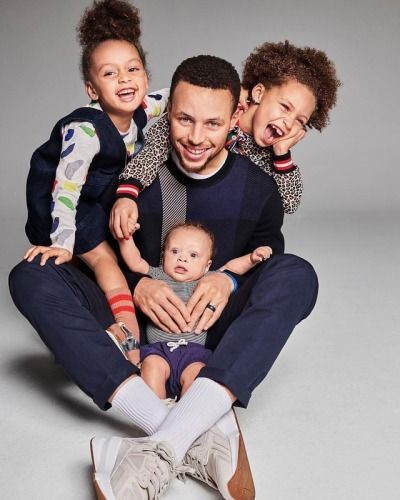 Ryan Curry, daughter of Steph Curry and Ayesha Curry looked so adult in the latest public appearance. Everybody is surprised by the drastic change in the star kid.

Moreover, Ryan Curry is the second-born daughter of NBA MVP Stephen Curry and his wife, Ayesha Curry. She was introduced in public on an Instagram photo for the first time. Will the young girl match her father’s height in the future?

The latest glance of Ryan Curry

Surprisingly, the little four-year-old girl is growing taller and taller towering height. Recently, Ryan’s mother, Ayesha Curry posted a picture of their daughter on Instagram on the 16th of December.

In the photo, Ryan was sitting on a swing set. Moreover, she wore a white dress with a tulle skirt fit for a ballerina. Similarly, she layered the dress with a black cardigan, adding a ribbon in a matching color that sat on top of her head. This completed the cute look perfect for holiday parties.

Certainly, Ayesha was astonished by how much her baby girl is growing up so quickly. She captioned the photo by saying:

Into the bargain, the reactions and comments of the followers were also as expected. Many fans commented saying that the baby is now so grown up.

Specifically, Ryan Curry was born to Steph Curry and Ayesha Curry. The happily married couple shares two other children. One of them is Riley, seven years old and the other one is just a year old son, Canon. The whole joyful family wraps up the three children and mother and father together.

Not a long ago, a sweet family photo was made public. The photo showed that not only Ryan but also the other two children seemed to change a lot, in terms of growing up! Surely, many of the fans felt that time is flying fast after seeing the pictures of the Curry family. It is more like that the children have transfigured themselves into the mini versions of their parents.

Additionally, the romance of the couple is quite an epic love story. According to some sources of information, they had met each other for the first time when they were just teenagers. When Steph was in his college days, he was after Ayesh romantically. Though Ayesha was uncertain at the initial phase, he ultimately could win her heart. And at present, Steph is the apple of Ayesha’s eyes!

Likewise, there seems to be an amazing and positive spark in the love among the Curry family. Keeping their beloved children close, the couple had the new tattoos that featured the signs of their babies. Each of the tattoos represented their three children. Their tattoos consist of three signs. The signs are young wolf, butterfly, and horse!

Also, read about Christmas 2019 Of Kelly Ripa’s Family; Holiday Vibes, And Family Christmas Card Of Kelly Alongside Her Daughter, Son, And Husband!!

The famous player was born on the 14th of March, 1988. His birthplace is in Akron, OH. Presently, he is thirty-one years old with the birth sign of Pisces. More Bio…

Professionally, Ayesha Curry is a Television show host, also a former actress and model. She has almost six million followers on Instagram. She was born on the 23rd of March, 1989. The beautiful celebrity was born in Toronto, Canada. Talking about her age, she is thirty years old for now. Likewise, her zodiac sign is Aries. More Bio…