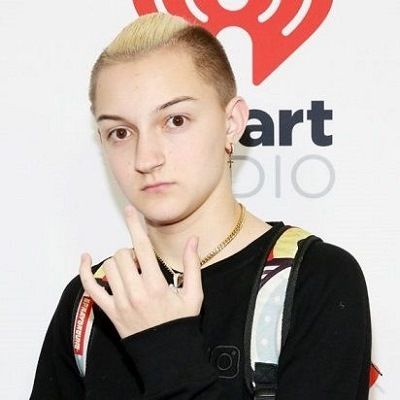 Who is Backpack Kid?

Backpack Kid is an American dancer. Backpack is also a rapper and social media personality.

He won Kids’ Choice Award for Favorite Dance Trend to the creator of the viral dance ‘The Floss’.

He landed a role in Katy Perry‘s SNL performance of her new single called Swish Swish.

Backpack Kid was born as Russell Horning on December 19, 2001,  in Lawrenceville, New Jersey, United States. He is a Sagittarius.

His mother is Anita Redd. He has one younger sister, Jill.

He had taken a dance class for one month but left it since he felt that it was not helpful.

Backpack kid first started an Instagram page. He began to post his dance videos on it. In 2014, he also did dance performances in the church camp. One of his dance videos went viral and this gave him fame and popularity in January 2016.

He is a professional rapper and hip-hop artist. Moreover, he had launched many songs such as Flossin featuring DJ suede, Drip on Boat, Ball out, etc. He launches his debut four-song EP ‘Swag Pack kid’ on his 17th birthday.

His first breakthrough came in 2015 when 700k followers tagged him online. He starts to rise after Rihanna posts his dance move for expressing her delight for selecting for 6 Grammy in 2016.

Then after Katy Perry invited him to dance in her new song ‘Swiss Swiss’ on ‘Saturday Night Live’ of 2017. He created the #IGotSkillsChallenge. Backpack collaborated on videos with fellow dancers such as Maleo Bowles and Benny Imprint.

He is popular for his unique dance moves which he performed on the show SNL. His signature moves were named flossing or The Russell.

His move became so famous that even athletes on the field have performed it during the football games. However, ESPN also went on to interview the Backpack kid on it.

He has done commercials for checkers $ 1 fries campaign.

Alongside drag queens and club kids, she staged a vogue dance battle for her “Swish Swish” performance, pulling double duty as a performer and a hype woman.

Backpack sues Fortnite for using his Flossing dance move without asking for permission or paying him.

It is rumored that one of the gamers’ dance moves Flossin is copied or invented by him.

Backpack Kid has blonde hair and brown eyes. His height 5 feet 10 inches and weight is 60Kg.

Backpack has around 2.1M followers on Instagram, about 24k monthly listeners on Spotify. He has over 418k subscribers on YouTube.

Also get to know more about Hilde Osland, Shirley Ballas, and Brendan Cole.

Sarah Hyland’s struggles with her kidney dysplasia! Her renal transplant and fluctuating weight! Know how she slammed the body shamers!