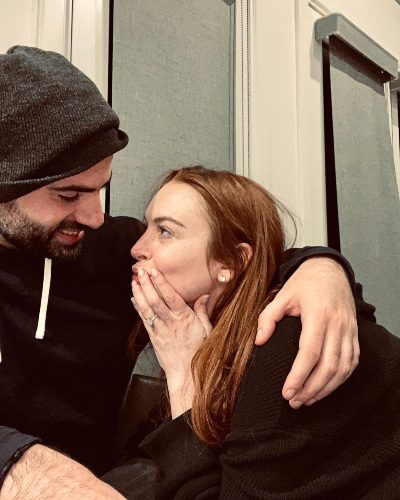 Lindsay Lohan is officially engaged to fiance Bader Shammas! She announced her engagement on 28th November 2021 with cuddly Instagram photos with Bader.

She tagged him with a diamond ring emoji and wrote,

In the picture, she showed her sparkling engagement ring and they look happy together. He is the Assistant Vice President at Credit Suisse in Dubai where she has been calling home for the last seven years. The couple has been dating each other for two years. He confirmed their engagement by retweeting his fiancee’s announcement.

Likewise, it is going to be a second engagement for Lindsay as she was previously set to marry Russian millionaire Egor Tarabasov before splitting in the year 2016.

Also read Lindsay Lohan was seeing someone but they broke up recently! She is single again!

Who is Bader Shammas?

Bader Shammas is a financier who serves as the assistant vice president at Credit Suisse which is an international wealth management company based in Dubai, United Arab Emirates. Previously, he was an associate at BNP Paribas Wealth Management up until 2017.

Shammas earned his Mechanical Engineering degree from the University of South Florida in 2010. Likewise, he earned a Bachelor of Science degree while attending John H. Sykes College of Business which is affiliated with the University of Tampa.