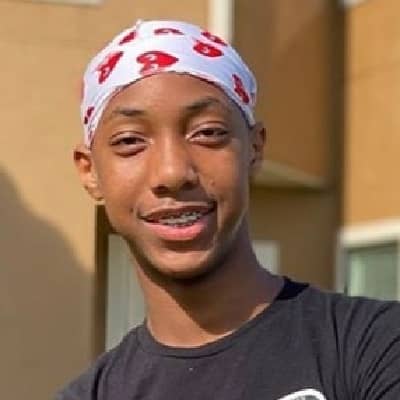 Talking about Badkid Jay’s relationship status, currently, he has been dating Asya.

Furthermore, he was in a relationship with Emily in 2018. But the couple gets separated in 2019 after dating for a year.

Badkid Jay is an American YouTuber, and social media influencer. He is also a hip-hop artist best known as a member of the rap trio called The Bad Kids.

The band was conceptualized in 2017 by American YouTuber, rapper, and, comedian Funny Mike aka Young 22 aka 22 Savage.

Badkid was born on January 15, 2005, in Baton Rouge, Louisiana, United States. His birth name is Jay.

The name of his parents isn’t disclosed. He has two younger sisters Kam aka Bad Kid Kam and Mirah aka Bad Kid Mirah.

Both of his sisters are Instagram’s Star. His ethnicity is All-American.

Being in his teen, he is still attending a high school in his hometown. Other information regarding his education is unknown.

Bad Kid Jay is one of the members of a rap group called ‘The Bad Kids’. The Bad Kids compromises of various stars making rap music together. Brazzy Wave aka DEDE 3X and Brandon Dukes aka BadKid Bam are other key members of The Bad Kids trio besides BadKidJay.

The band was conceptualized in the year 2017 by an American YouTuber, rapper, and, comedian Funny Mike aka Young 22 aka 22 Savage. They began to appear on YouTube from late 2017.

The trio group had published 3 songs between Christmas Day in 2017 and New Year’s Day in 2018 on their mentor Funny Mike’s YouTube channel.

The videos were received positively by subscribers and fans and were viewed more than 3 million times over the following 2 weeks.

Jay has usually appeared on Funny Mike’s YouTube channel, as part of The Bad Kids troupe.

Jay is also a popular social personality and has amassed a great fan following in his accounts.

He runs two personal YouTube channels. One of his channel names is Badkid Jay which has amassed up to 40K subscribers. He posts various short clips, vlogs from his and his family’s daily lives as well as behind-the-scenes footage from their video shoots in this channel.

Likely, he has titled his other channel as Imbadkidjay. It has around 400K subscribers on this channel.

Apart from his musical talents, he is also an avid fitness freak and was a member of the school basketball teams. Further, he also won the first prize in an AAU (Amateur Athletic Union) basketball tournament.

As being a social media sensation, he might earn a good amount of money. His net worth is said to be around $500,000.

His income is from his YouTube and music career. However, he has not shared details related to his income.

The YouTuber is far from any sort of rumors or controversy until now.

Badkid is active on Instagram with two accounts. His account titled badkid.jay which has amassed more than 152k followers, and another account named imbadkiddjay that has garnered around 82K followers.

Also, get to know about Chase Rutherford, Millie T, Hamzah The Fantastic, and Sharan Jones.