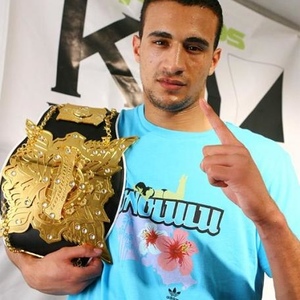 Prior, Badr Hari was engaged with Estelle Gullit

Badr Hari was engaged in a relationship with Estelle Gullit and had one daughter as well, an affair, but currently, he does not have any girlfriend and Badr Hari is a Single man.

This man has a beautiful and blessed daughter. His daughter’s name is Amber Hari, she is one of the important parts of his life. Her daughter brings joy and happiness in his life.

He has a good relationship with his family and brothers, at present. He is cherished and by sexuality, he is very straight.

Who is Badr Hari?

Badr Hari is a Moroccan-Dutch super heavyweight kickboxer from Amsterdam, fighting out of Mike’s Gym in Oostzaan.

Badr Hari was born on December 8, 1984, in Amsterdam, Netherlands. He comes of Dutch/Moroccan Nationality and his ethnicity is Middle Eastern.

Yassin Hari is his sibling. He began his kickboxing at just 7 years old.

He is a man of fortune, from his early life, he began practicing his kickboxing game, he was guided properly by Former World Champion Mousid Akamrane.

There is no information on his educational background as well.

Hari is a man of fortune, from his early life, he began practicing his kickboxing game, he was guided properly by Former World Champion Mousid Akamrane, it provided him a new shape to built his career.

He also joined a famous gym named Chakuriki Gym, he was perfectly trained there a gym, moving to his early kickboxing career, at his initial phase of kickboxing standing, and his real career gets started in the year 2005.

He showed the public that he can be one of the remarkable players of the future. He has gained many fans through his outstanding contribution to the kickboxing game.

He played perfectly in all the seasons of the game since 2006. He has been best in his playing career, he also bags awards and titles due to his paramount performance in the kickboxing game.

Badr Hari began his career with the aim to be heavyweight boxing like George Foreman.

He has been officially praised by the King of Marocco, Mohammed VI, in 2009 for his outstanding accomplishments in the sport. As of October 16, he is ranked the #10 heavyweight in the world by Combat Press.

Badr Hari: Salary and Net Worth

he earns a net worth of $5 million however there is no information about his salary.

Badr Hari is the man of the controversies and rumors.

He was charged in some cases and also gets arrested by police, in the year 2014, May he was arrested throughout the tournament in Dubai.

Hari has been a prominent figure in the world of kickboxing and was once considered the best kickboxer in the world.

However, he has been involved in a number of controversies related to his “unsportsmanlike conduct” in sports and crimes of violence outside of the ring.

Badr Hari has a height of 6 feet 6 inches. His body weighs 109kg. He has Black hair and Brown eyes.