Bailee Madison is an American actress. She is currently dating Alex Lange since September 2016.

Cute and adorable Bailee is an unmarried woman and is currently dating Alex Lange since September 2016.

Previously, she has been in a relationship with Emery Kelly in 2015 and with Zachary Gordon in 2013. She is not associated with a divorce case yet. 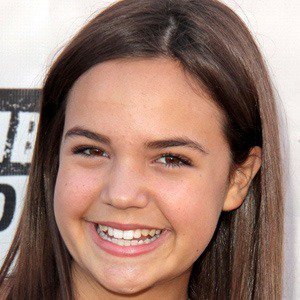 What do I love about acting? I love traveling, meeting new people, exploring and just doing what I love

I want to be the coolest aunt in the entire world

it's been so much fun. I'm having a blast!

Who is Bailee Madison?

Bailee Madison is an American actress.

Madison is extremely prominent for her role in ‘House’, ‘Bridge to Terabithia’, ‘Brothers’, and ‘Just Go With It’.

She is a hardworking person and has made a respectable position in American T.V and film industry.

Bailee was born to American parents on October 15, 1999, in Fort Lauderdale, Florida, U.S.A.

Her nationality is American and belongs to mixed (Irish and English) ethnicity.

Her mother’s name is Patricia Riley and her father’s name is unknown. She was raised by her parents in a friendly and entertaining environment along with her four brothers and two sisters. Her older sister named  Kaitlin Riley is also an actress.

She was highly encouraged by her mother to secure her career in the acting field and she was also highly interested and dedicated.

Concerning her educational background, she attended Christ Church School. She has not yet completed her studies.

Bailee started her professional acting career in 2006 and appeared in the film “Lonely Hearts”. Next year (in 2007) she made her T.V debut and appeared in one episode of T.V series “CSI: NY”.

Because of her minor role, she didn’t get so much popularity; however, struggled more and more to get a major role and successful film. She got the role of ‘May Belle Aarons’ in a 2007 film titled “Bridge to Terabithia” for which she received huge positive responses and reviews from fans and viewers.

Also, she won the ‘Young Artist Awards’ twice in different categories for the same film (Bridge to Terabithia).

Also, she appeared in the successful T.V series “House” in 2007 for which she was again nominated for the ‘Young Artist Awards’.

Bailee Madison: Salary and Net Worth

It is said that she gets paid a handsome amount of money from different films and T.V series and has an estimated net worth of $7 Million as of 2022.

There are no drastic rumors regarding Bailee’s personal and professional life.

It seems like she is doing her best job without harming others for which she hasn’t been a part of controversy yet.

Her hair color is dark brown and her eye color is brown.