(Actress and a dancer) 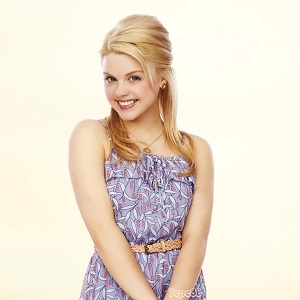 Bailey has for sure a large number of admirers. And her marriage for sure has broken a lot of heart of those admirers. She is committed and is married to Tyler De Young.

Her surname Buntain changed to De young after her marriage with Tyler De Young. The couple tied the knot on August 3, 2014. Beautiful Bailey might have been to some relationships before she was famous, but it is not known to the public yet.

Presently, they are happily living their married life and have no sign of divorce. Other than her married partner she is not with anyone in any other affairs.

Who is Bailey De Young?

California-born Bailey De Young is a well-known actress and a dancer. Bailey is popularly famous in the media for her main role portrayal of Virginia “Ginny” Thompson. It was in an American comedy-drama television series, “Bunheads”. Her other prominent role in a TV series is of Lauren Cooper in “Faking It”.

Bailey De Young was born on September 16, 1989, in the city of Sacramento in California. She possesses American nationality and is of mixed(Scottish-English) ethnicity.

She grew up in her home state. Now 27-year old actress was passionate about dancing from the early days of her childhood. At the age of 7, she started training as a ballet dancer. The talented and elegant actress was also into singing and acting from her childhood.

As per her education, she joined American Musical and Dramatic Academy (AMDA) in New York. She graduated from there.

Bailey initiated her career at a very young age when she started training for different forms of dance. She graduated from American Musical and Dramatic Academy. Afterward, she got an opportunity to play the character of Ginny Thompson in an American comedy-drama television series, “Bunheads”.

From 2013 to 2014, she played the main role in the series. This for sure boosted her career and landed her many other roles. In the same year, she also played Jenna Taylor in an American sitcom about a middle-class family, “The Middle”.Likewise, her other major portrayal is of Lauren Cooper in “Faking It” from 2014 to 2016. Bailey has also featured in TV films like “Petals on the Wind” as Carrie Dollanganger in 2014 and “The Murder Pact” as Poppy in 2015. In the year 2016, Bailey appeared in the television series Gilmore Girls: A Year in the Life. Similarly, she also appeared in another television series named The Marvelous Mrs. Maisel in the year 2017.

Bailey De Young has accumulated a net worth of $500 thousand. But there is no information regarding her salary.

Bailey De Young is all focused on her career and her marriage. She tries to avoid getting into any public rumors and controversies.

Also know more about the early life, career, net worth, relationships, and controversies of other actress and a dancer like Chandler Kinney, Tom Holland, Alicia Vikander, Amanda Schull, and Bailey De Young.

Cynthia Bailey’s daughter Noelle Robinson comes out as gender fluid! Is her mother in acceptance of her sexuality?