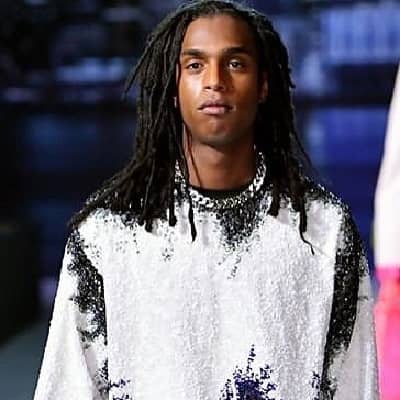 What is the relationship of Bakar (Musician)?

Talking about his relationship details, Bakar is possibly single and he might not be dating anyone at the moment. He seems to be focused on his career and professional life.

Moreover, Abubakar has been secretive about his relationship details and related news. He has kept his personal profile low-key.

Bakar is also known as Abubakar Baker Shariff-Farr is a well-recognized British singer, songwriter, and model.

Bakar is widely famed for his experimental indie rock style and his mixtape Badkid in May 2018, subsequently releasing the extended play Will You Be My Yellow?

Moreover, Baker is scheduled to release his debut album, Nobody’s Home in February 2022.

Baker was born on 12 February 1994. At present, he is 28 years young star. Likewise, his birthplace is Camden Town, London, the UK.

Talking about his nationality, Abubakar holds a British identity whereas his ethnicity is Yemeni and Tanzanian.

Regarding education, the musician studied at a state school before being sent to a boarding school in Surrey by his mother.

Regarding his social media presence, Baker is an active personality on social media. Bakar has more than 181k followers on his official Instagram account @bakarrr.

He is also active on Twitter with around 13.9k followers.

Moreover, Abubakar is also available on Facebook with nearly 7k fans and supporters.

Bakar started making music in 2015 by splitting samples of Bombay Bicycle Club and King Krule songs. he worked on several projects and was unavailable for a long time. He officially independently released his debut single, Big Dreams in March 2017.

Later, in 2018, Abubakar gained high fame after being featured on the official soundtrack of the video game FIFA 19 in 2018.  The musician has also performed on the son, Scott Free on the online German music series ColorsxStudios in March 2017. The star also released the non-album singles, Small Town Girl and Something I Said.

Moreover, Baker released the single, Million Miles and mentioned his debut full-length project, Bad kid. In April 2018, the star released the project’s third single, All In, following the lead single, Big Dreams(2017) and Million Miles(2018). Baker also performed at Live at Leeds in May 2018.

What is Bakar’s net worth?

A famed British musician, Baker has earned a handsome amount of money from his profession. He has been active in his profession from the year 2017 till the present.

Is Bakar involved in any rumors and controversies?

Baker has never been part of any controversial matter or rumors till now. The star has been preoccupied with his professional and private life.

It seems that Abubakar prefers enjoying his personal life and does not want to merge it with his professional life.

27 years young star, Bakar has handsome looks and an admirable personality. He has not stated his exact height but seems to be more than 6 feet tall.

Furthermore, Abubakar has black eyes whereas his hair is black.