Athlete Bakhar Nabieva is low-key about her love affair. She is currently single.

But from the different sources, we found that the beautiful sexy lady is single and fully focused on her career right now. 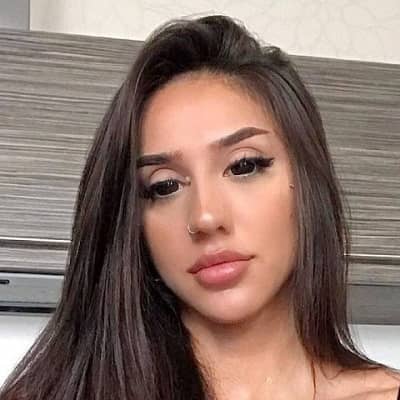 Bakhar Nabieva is a fitness expert, bodybuilder, and model, who has risen to prominence in recent years.

Bakhar is also known as “Miss Iron Bum”. She is one of the famous female bodybuilders who has such a huge fan following.

Bakhar was born in an Iranian family. She hasn’t revealed details about her childhood, including the names and vocations of her parents, nor if she has any siblings or not. Talking about her education, she attended high school in her hometown.

Bakhar Nabieva stands tall with the height of 5 feet and 7 inches and weighs around 55kg. Her vital statistics are 35-23-36 inches, and she has dark brown hair and dark brown eyes. She has a perfect body. Being a fitness freak, Bakhar maintains her body very well.

Bakhar Nabieva was bullied during her school days for having a thin and lean body, this was the primary reason for her to get into fitness and bodybuilding. Then, Bakhar became interested in the gym and began attending one almost every day. She started recording her gym sessions which she also started posting online, which turned out to be a good practice as she started gaining popularity on social media platforms. Gradually, she was receiving new followers on Instagram, and in no time reached 100,000 which increased with every new post.

Gradually, Bakhar’s body began to change, and she became more aware of the fitness world. She started learning about specific exercises and new fitness routines on an almost daily basis, which brought success and she was slowly becoming one of the most prominent female fitness models. She now has over 2.3 million followers on her official Instagram page and has collaborated with several popular brands, such as DragonPharma, with which she has an exclusive contract, and has been featured in several magazines, including the Daily Star, with whom she conducted an interview about her life before becoming a fitness model, and was also featured in Mirror, UK. These have further increased her popularity and wealth.

Due to her looks, some have questioned if she is transgender, but the answer is no. She just uses steroids which have got her hormones a bit mixed, but she was born female and stays female. Many regard her as rather beautiful.

Encouraged by her success, and popularity on social media, Bakhar started her own YouTube channel with the name Bakhar Nabieva, on which she now has over 30.6k subscribers. She has uploaded videos from the gym, making her fitness routines available to people around the world, and has also shared details from her personal life. Her videos have been viewed more than 1.3 million times, which has also contributed to her wealth.

Being such a popular personality, Bakhar has a great net worth. According to authoritative sources, Bakhar Nabieva’s net worth is as high as $250,000 as of 2022. But her salary is still unknown.

You may also like to know Age, Height, Weight, and other information about Franco Columbu, Lary Wheels