Barbara Meier is a German actress and fashion model. 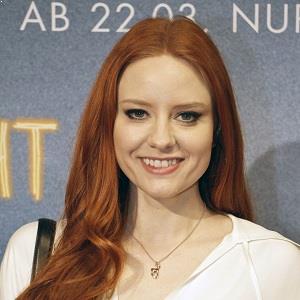 What is the relationship of Barbara Meier?

Barbara Meier was involved in a relationship with German Film Director Oliver Berben for a brief amount of time. At present, she is believed to be single.

Who is Barbara Meier?

Barbara Meier is a German actress and fashion model. People mostly recognize her as the winner of the second season of ‘Germany’s Next Topmodel’.  Additionally, she has appeared in several other television series like ‘High Society Murder’, ‘SOKO Wismar’ and ‘Notruf Hafenkante’ among others.

Meier was born in Amberg, Germany on July 25, 1986. Throughout most of her childhood years, she grew up in the small Bavarian town of Amberg.  She is of German nationality. Furthermore, there are no details available about her ethnicity at present.

Talking about her education, Meier attended the Fachhochschule Regensburg in order to study mathematics.

Meier was initially cast in the ‘Germany’s next Topmodel’. Although she did not have prior modeling experience, she became the winner of the competition on 24 May 2007. Next, she appeared in several international magazines such as ‘Vogue Taiwan’, ‘Madame Figaro’, ‘Grazia’, and ‘InStyle’ among others.

Additionally, she also became the face of many advertising campaigns for several brands like Pantene, C&A, Müller Milk, McDonald’s, Fabi, Borsalino, C’est comme Ca, and Colin’s Jeans among others.

Furthermore, Meier has appeared in several movies and television series to date. Some of them include ‘SOKO 5113’, ‘The Old Fox’, ‘Heiraten ist nichts für Feiglinge’, ‘The Pasta Detectives 2’, ‘Schwägereltern’, ‘SOKO Stuttgart’, ‘Siebenschön’, ‘Küstenwache’, ‘Schon wieder Henriette’, and ‘Der Staatsanwalt’ among others. All in all, she has over 15 credits as an actress. Apart from her acting career, Meier is also an author.  She has also been involved in several charity works in her career.

Meier has not revealed her current salary. Additionally, there are no details available about her estimated net worth at present.

Meier attracted several controversies along her way after she did not wear black at the 2018’s Golden Globe Awards Ceremony. Black dresses were worn in the ceremony in order to support the Times Up movement.

Additionally, she also became part of the news recently after she suffered a wardrobe malfunction in the 2018 CANNES. At present, there are no rumors concerning her life and career.

Talking about her body measurement, Meier has a height of 5 feet 8½ inches (1.74 m). Additionally, she weighs around 56 kg. She has a measurement of 32-24-35 inches. Furthermore, her hair color is red and her eye color is blue.

Also get to know more about the birth facts, education, career, net worth, rumors, height, and social media of different personalities like Sandra Vergara, Andrea Espada, and Amanda Righetti.