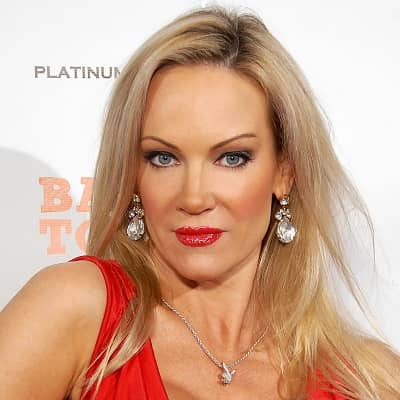 What is the relationship of Barbara Moore?

Barbara is possibly single as of 2020.

Before she was engaged to Lorenzo Lamas in 2004 but the couple amicably called off their wedding and get separated in 2006.

Barbara was also in a relationship with Eric Schiffer in the year 2007.

After that, she has been a single mother since 2008.

Who is Barbara Moore?

She gained popularity as being Playboy‘s Playmate of the Month for December 1992.

She was born on August 21, 1968, in Spokane, Washington, and raised in Seattle. Her parent’s names are unknown.

Talking about her nationality, it’s American, and she belongs to mixed (Irish and English) ethnicity.

She hasn’t disclosed anything regarding her education too.

Barbara Moore moved to TN to pursue her career while working as a flight attendant for a commercial airline. She appeared in music videos for artists like Reba McEntire, Waylon Jennings, and many more.

Barbara was Playboy‘s Playmate of the Month for December 1992. She also further appeared in Playboy videos. And with her increasing popularity, she also serves as a Playboy Ambassador for several years.

Afterward, the model serves as a foreign spokeswoman for the iconic publication and was featured in numerous videos, pictorially celebrated layouts, and as a “Playboy Bunny” for The “Playboy Turns 60” Tour _(2014). In February 2018, she was recruited to serve as chief branding officer for Playmates for a Peaceable Planet.

Talking about her television credits, she plays a lifeguard in the widely popular Primetime hit Baywatch.

Her other film credits include a role as a fembot in an installment of the blockbuster hit and feature film franchise Austin Powers: International Man of Mystery.

Additionally, Moore also made guest appearances on episodes of  Married… with Children in 1987, and in “Baywatch Nights”, “Hightide”, “Nightstand” Blossom in the year 1990.

Her dance achievements include 26 championships, two of which were Ohio Star Ball wins and two undefeated championships.

She must have amassed a good amount of money from her career. But her net worth is unknown. Other information regarding her salary is also not available.

In April 2018, Barbara claimed that she had an affair with future US President Donald Trump in 1993 while Trump’s wife at the time, Marla Maples, was pregnant with Tiffany Trump.

In May 2018, former Playmate and German model Elke Jeinsen also told how she and Barbara were invited to Trump Tower in 1993 also had watched Barbara and Trump have sex.

Moore was 24 yrs old when she says she has affair with Trump. She claims that they met at Trump’s Castle Casino hotel. That time she was hired by Playboy to do a fashion show at the hotel.

She claims told there was an instant attraction between the two of them when they met at a party and she said he made her feel special as well as being a very passionate lover.

Barbara also insists that it wasn’t just a one night stand and that he soon invited her down to Mar-a-Lago in Palm Beach, Florida.

She has blonde colored hair and hazel colored eyes.