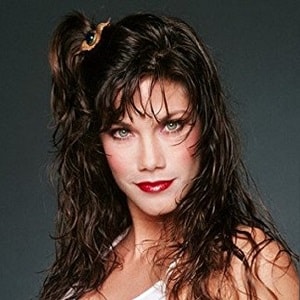 “I believe that mink are raised for being turned into fur coats. And if we didn't wear fur coats, those little animals would never have been born!”

Barbie Benton married to a retailer and entrepreneur, George Gradow in 1979 and their relationship is still going strong. They have great mutual understanding and trust. They were having an affair since very long before their marriage.

They have welcomed two children, Ariana Gradow on July 13, 1988, and Alexander Benton Gradow on August 23, 1986. After her retirement from a professional career, she is working as an interior decorator since 2002. Before her marriage, she had an affair with Hugh Hefner from 1969 to 1976.

Who is Barbi Benton?

Barbi Benton is a former model and actress and she has made her appearance in several successful movies and TV series like ‘The Third Girl from the Left’, ‘American Bandstand’, ‘Million Dollar Rooms’, etc. and she rose to international fame after her appearance in the Playboy Magazine.

She was born on January 28, 1950, in New York City, USA. She has a birth sign of Aquarius. She belongs to the Jewish family and her father was a military doctor and later became a physician as well, while her mother was an investment counselor.

Her family shifted to California when she was 2 years old and she spent her early days in Sacramento. She holds American citizenship but her ethnicity is Jewish.

She attended the Rio Americano High School and later she joined the UCLA High School. She was about to be a veterinarian but she had to give up due to her career option.

After her graduation, she began modeling. She got an opportunity to feature in Playboy at the age of 18 and she did not let that chance slip through her hands. She played as a substitute model on the ‘Playboy After Dark’ show and later she was promoted by Hefner and she became the co-host of the show.

Benton enjoyed her career as a country singer and then she appeared in the West Germany comedy film ‘The Naughty Cheerleader’ in 1970. She took part in short comedy series ‘Sugar Time!’ and made her appearance in TV series such as ‘The Sonny and Cher Show’ and ‘Hee Haw’. Her performance on the show ‘Hee Haw’ gave her a huge appreciation.

She also worked as a recording artist and a singer. ‘Brass Buckles’, which is her single song, topped #5 on the Billboard’s country singles chart in 1975 and she released her first album ‘Barbi Doll went’ in the same year which became #17 on the US country chart.

She announced her retirement from a professional career in late 2000.

She was awarded ‘TV Land Awards’ in 2007 for her work in ‘Hee Haw’. Apart from that, she has not won other award and has not been nominated for her work.

Barbi Benton: Net Worth and Salary

She has been highly successful in her career and it is estimated that she has a net worth of around $20 million.

She is very much secretive about her private information and loves to keep her lips close. She has not been involved in any kind of rumor and controversies.