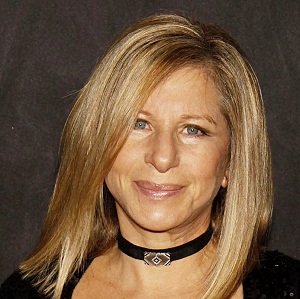 There's a part of you that always remains a child, no matter how mature you get, how sophisticated or weary

I've been called many names like perfectionist, difficult and obsessive. I think it takes obsession, takes searching for the details for any artist to be good

Doubt can motivate you, so don't be afraid of it. Confidence and doubt are at two ends of the scale, and you need both. They balance each other out.

What is the relationship of Barbra Streisand?

Barbra Streisand is a married woman. She is married to James Brolin. He is an actor by profession.

The couple tied the knot on 1 July 1998, at Streisand’s estate in Malibu, California. They are also known as Hollywood’s’ power couples. They met for the first time at a dinner party. They went for their first date on 1 July 1996. So, their marriage date is the second anniversary of their first date.

Previously, Barbara was married to Elliott Gould. They married on 21 March 1963 and has two children with her. A son named Jason Gould. But due to some differences, the couple divorced in the year 1971.

Prior, she has had many affairs. She has been linked with Pierre Trudeau, Ryan O’Neal, Andre Agassi, Don Johnson, Richard Baskin, Kris Kristofferson, Jon Peters, and Peter Jennings.

Who is Barbra Streisand?

She was born on 4 April 1942, in Williamsburg, Brooklyn, New York City, New York, USA. Her nationality is American and her ethnicity is Ashkenazi Jewish.

Both her parents worked in the same school and this is how they met. Her parents married in the year 1930. In August 1943, her father passed away due to complications from an epileptic seizure.

Then her mother re-married. She has an elder brother named Sheldon Streisand and a half-sister named Roslyn Kind. Roslyn is also a singer.

In which school did Barbra Streisand attend?

She studied at the Jewish Orthodox Yeshiva of Brooklyn. She was a bright student but her only complaint was she was an undisciplined student. Then she changed her school to  Public School 89 in Brooklyn itself.

During her career, Barbra Streisand has released 33 studio albums, Guilty being her most successful album to date with over 22 million sold worldwide and a six-time platinum certification by the RIAA. To date, she has won eight Grammy Awards, plus an additional Grammy Legend Award and Grammy Lifetime Achievement Award.

In addition, she has been inducted into the Grammy Hall of Fame three times. Her most recent concert tour took in $119.5 million at the box office and was attended by 425,000 people worldwide. As an actress, Streisand came to international success in the Broadway play Funny Girl, which she reprised for the film adaptation and won the Academy Award for Best Actress.

She went on to film several critical and commercial hits including Hello, Dolly!, and The Way We Were. In 1972, Streisand established Barwood Films and went on to write, direct, produce and star in the widely successful Yentl and again direct, produce and star in the award-winning films The Prince of Tides and The Mirror Has Two Faces. Among her numerous awards are four Emmy Awards, four People’s Choice Awards, and a Peabody Award.

In 1991, a compilation of all her works including live performances, songs, and other unreleased material released in a four-disc edition titled’ Just for the Record. In 2012, as a part of the ‘Barbra Live Tour’, she performed for three hours straight at the Barclays Center, Brooklyn.

She had encounters with Liam Neeson in 1991 and Clint Eastwood in 1989.

How tall is Barbra Streisand?

Barbra Streisand has a perfect height standing at 5 ft 5 inches tall and her total body weight is 54 kg. She has a blue eye color with dyed blonde hair color. Her bra size is 34C.