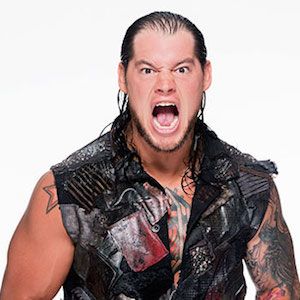 You look at me: you see the tattoos, and I ride a motorcycle

I don't envy people with long hair. So, I'm glad mine is gone

My dad brought me up not to accept second place. I lost a karate tournament once and got a trophy for fourth place. My dad tossed that trophy out the window on the way home.

Baron is a married man. He is married to his longtime girlfriend, Rochelle. Her full name is Rochelle Alexandra Roman and she hails from Tampa, Florida. She was born to Carlos and Ivonne Roman on August 29, 1991.

The couple tied the knot on April 29, 2017, in Clearwater, Florida. Prior, he has had affair with Maria Brink. Maria is a lead singer of the music band This Moment. He does not have any children from any of his relationships.

Who is Baron Corbin?

Tall and muscular Baron is an American wrestler who works under the contract of WWE. He is also a retired boxer and American football player. Popular by his ring name Baron Corbin, he is a full-time wrestler for WWE and features in SmackDown.

He is also known as the retired American football player who was an offensive lineman in the NFL for the teams like “Arizona Cardinals” and “Indianapolis Colts”.

Baron was born in Lenexa, Kansas, U.S. Kansas born Baron Corbin was born on September 13, 1984, as Thomas “Tom” Pestock. He was born to father Steven Pestock and mother Mona Pestock.

He attended Northwest Missouri State University where he mainly focused on playing football. He played offensive guard there. There is no information regarding his childhood and education on the internet and nor he has shared any of it during interviews.

He started as a starter in his junior year and was named honorable mention all MIAA in 2007 and first-team all-MIAA in 2008. After his college career, he joined with the Indianapolis Colts on April 27, 2009, for a small amount of time. He also signed for Arizona Cardinals but was released soon. His career ended here.

By the age of 21, he was already a two-time Amateur boxing champion. He won Kansas-Missouri Golden Gloves regional championship 3 times. Pestock boxing career too didn’t go long and strong after he lost to Andrae Cathron at the 2008 Golden Gloves National Tournament of Champions.

His major career is wrestling where he has been able to survive for a longer period of time. He started from NXT and was a part of it from 2012 to 2016. He was promoted to SmackDown in 2016.

His full-time wrestling job pays him a handsome salary of $285000 and has accumulated him a massive net worth of $1.5 Million. However, his estimation of net worth is not available.

Baron was criticized as an American football player as that career didn’t work out for him. A man of such persona doesn’t be part of anything that drags him into rumors and controversies.

He has a height of 6 feet 8 inches tall and weighs 129 kg. His body measurements are chest size is 48 inches, waist size is 35 inches, and biceps size is 19 inches. He has a dark brown eye color and black hair color. He has dress size and shoe size are unknown.