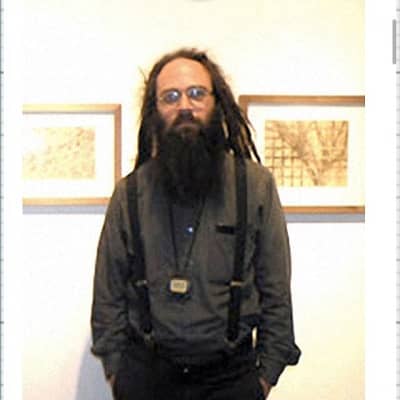 Currently, Barret is believed to be single and not much is known about his relationships.

Currently, he isn’t seeking any relationship and he is living his artistic and social life. He is a private person when it comes to his personal life.

Who is Barret Oliver?

Barret Oliver is an American former actor who is best known as Bastian Balthazar Bux on the film adaptation of the popular novel ‘The Neverending Story’. Furthermore, he is the winner of the Saturn Award in 1986 for his work in D.A.R.Y.L.

Currently, he is working as a professional photographer. He is also an author of the book A History of the Woodburytype.

Barret Oliver was born on August 24, 1973, in Los Angeles, California, USA. As of 2021, he celebrated his 48th birthday. His birth name is Barret Spencer Oliver.

Likewise, his parents are Kent Oliver and Kathy Oliver. His father Kent was a popular interior designer in the town. Barret has an older brother, Kyle who was also a child actor. Similarly, he started acting inspired by his older brother. Due to his family’s support, he and his brother succeeded to mark their name in the movie industry.

Oliver is of American Nationality. Moreover, his birth sign is Virgo.

Having started his career at such a small age, his first experience in front of the camera was in the 1980s when he did a commercial for ‘Jell-O,’ alongside actor Bill Cosby. After that, he had a small role of Jimmy the Kid in the Tv series The Incredible Hulk later acted in the Movie ‘The Circle Family’ in 1982 followed by another movie ‘Jekyll and Hyde… Together Again’ in the same year.

Barret was chosen from the 200 children who had auditioned for the film adaptation of the popular novel ‘The Neverending Story.’ After that, there is no looking backward and has managed to gain more than 20 movie credits to date. Some of the most notable films he has played include Knight Rider in 1982, American Fantasy Drama Tv Series Highway to Heaven in 1984, and this was followed by movies like D.A.R.Y.L, The Twilight Zone, The Neverending Story, and The Circle Family among others.

In 1989, he retired from acting and decided to pursue his career as a photographer and printer. He specializes in nineteenth-century processes like collodion and Woodburytype. Furthermore, his photographs are being displayed in museums and gallery exhibitions and also used in movies. Oliver is also an author of the book A History of the Woodburytype which was published by Carl Mautz Publishing in 2007.

There are no details of his salary but he has an estimated net worth of around $400K.

He is the Saturn Award in 1986 for his work in D.A.R.Y.L. Moreover, he has been nominated thrice for the Young Artist awards.

Barret stands 5 feet and 11 inches tall and his weight is 85 kgs. He has brown hair and blue eyes.

Oliver is not active on any social media profiles. Barret always prefers to stay away from the limelight.