Barrett Carnahan is an actor who acted in the series The Thundermans.

Barrett Carnahan is currently in a relationship. He is dating Nina Kubicki. She is an actress.

He proposed to her in late 2018. They had a wedding planned on May 23, 2020. Unfortunately, due to the coronavirus pandemic, their wedding has been postponed. 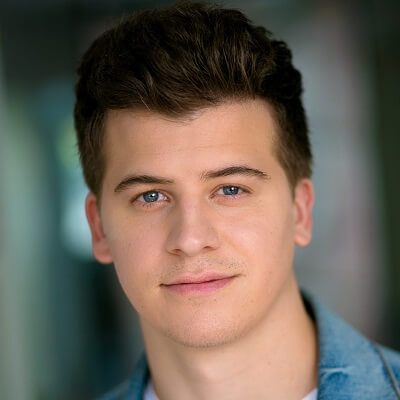 Who is Barrett Carnahan?

Barrett Carnahan is an American actor. He is best known for the Nickelodeon series The Thundermans, the Netflix series Alexa & Katie, Grey’s Anatomy, Modern Family, and Drop Dead Diva.

Barrett Carnahan was born as William Barrett Carnahan on September 22, 1992, in Youngstown, Ohio, US. As of 2020, his age is 27. He has revealed very little information about his early life and family background. He revealed in an interview that his father had tried being an actor when he was younger. According to him, his father moved out to LA but acting didn’t really work out for him. His only success was a small part in a sitcom that ran on the Nashville Network (TNN). There is no information about his siblings and other family members.

Barrett was interested in acting from an early age. He used to perform in plays in his local community and fell in love with acting and moved to Los Angeles in 2014 at the age of 22. His ethnicity is Caucasian.

Talking about his educational background, he went to Caldwell High School. After graduating from high school, he moved to Los Angeles to pursue his dreams of being an actor.

Barrett Carnahan burst into the acting scene in 2011. He appeared in two films that year, ‘Super 8’, and ‘The Pledge’ portraying ‘Military Personnel’, and ‘Tory Hedderman’ respectively. The following year, he appeared as a student in the television movie, ‘Fun Size’.

In 2013, Carnahan appeared as Isaac Yordy in an episode of ‘Drop Dead Diva’ and Nick George in the film, ‘A Christmas Tree Miracle’. 2014 proved to be a crucial year in his career. He appeared in the episode, Blind Sides as Darren Kelsey of ‘Reckless’, the episode, The Weeping Lady as Sherman of ‘Sleepy Hollow’, and The Darkness Beneath as Nathan Bowman of ‘Constantine’. Moreover, the same year, he portrayed Tyler Mathis in the film, A Matter of Faith.

2015 also proved to be a very important year in his career. He appeared in two short films, ‘Linked’, and ‘The Lonely Clown’ as Jackson Harper and Tyler respectively. Moreover, he also appeared in an episode each of K.C. Undercover and Modern Family. He portrayed Spencer and River Frat Boy respectively. Furthermore, he landed the recurring role of Link Evilman in ‘The Thundermans’. Similarly, he also landed the recurring role of Randy in ‘Good Girl Revolt’.

In 2016, he landed the role of David in an episode of popular TV show, ‘Grey’s Anatomy’. Similarly, he also landed the recurring role of Ian in ‘Colony’ and Sebastian in ‘Best Friends Whenever’. Moreover, he also appeared in ‘The Sub’ and ‘Bones’.

Carnahan stands at a height of around 5 feet 11 inches. His hair color is brown and his eyes are blue in color.

Barrett Carnahan has an estimated net worth of around $8 million as of 2022. There is no information about his annual salary. On average, an actor earns around $40k per year.

Barrett has not been involved in any controversies. He has been able to keep himself away from any type of controversy and scandal. So far, he has not done anything controversial in his career. Similarly, there are no rumors about him of any kind.