Bart Johnson is a married man. He exchanged his vows with an actress Robyn Lively on 25 September 1999.

This couple together has two sons Baylen and Wyatt, and a daughter Kate. 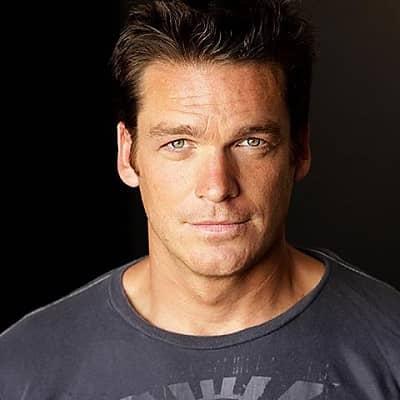 Who is Bart Johnson?

Bart Johnson is an American film and television actor. He is best known as Coach Jack Bolton in the film series High School Series.

This actor was born on 13 December 1970, in California, the US with a birth name Barton Robert Johnson. His father’s name is Bob, and his mother‘s name is Charlene, a television hairstylist.

His parents own Johnson Mill Bed & Breakfast. He has two brothers; Adam, and Brad. His both brothers are also an actor.

He studied at Wasatch High School. Bart attended the University of Utah as a pre-med student and later graduated with a Bachelor’s degree in Arts from Yale University. He belongs to English-Scottish descent.

As a son of a hairstylist, Bart Johnson spent his childhood on TV sets like Mork and Mindy, The Brady Bunch, and Charlie’s Angels. Earlier, in 1993, he made film debut as Frosty in Crossroads.

The next year, Johnson played Clint in TV sitcom saved by the Bell: The New Class. Afterward, he starred as Young Officer in the independent drama film My Family in 1995.

The same year, he made a guest appearance in a television series Diagnosis Murder, and Thunder Alley. Afterward, Johnson made appearances on several TV series including Jag, Sunset Beach, Babylon 5, and Walker, Texas Ranger.

He gained huge popularity as Coach Jack Bolton in the television movie High School Musical series’. He made a recurring role in all the franchises of this television movie.

It was awarded the AAA Four Diamond Award in 2012. Later, he converted the mill into a treatment center for those recovering from drug addictions.

The salary of this actor is under review. Meanwhile, according to some sources, he has an estimated net worth of $3 million.

There is no rumor and scandal about this actor. Meanwhile, he has managed to keep himself out of any controversy and rumor. Johnson is doing well in his career.