Bashir Salahuddin is an American actor, writer, and comedian who is best known for starring in films ‘Snatched’, ‘Top Gun: Maverick’ and TV series ‘Looking’, ‘GLOW’. He is married to Chandra Russell and the couple is blessed with one daughter.

Bashir Salahuddin is a married person. He has been married to his longtime girlfriend actress Chandra Russell since 12 August 2017 and is living a blissful married life. The couple welcomed a child together, a daughter, who was born in 2018.

Also, they made their red carpet appearance attending the 24th Annual Screen Actors Guild at The Shrine Auditorium on January 21m 2018, in LA, California. The family is currently living together and there is no sign of divorce between the couple. 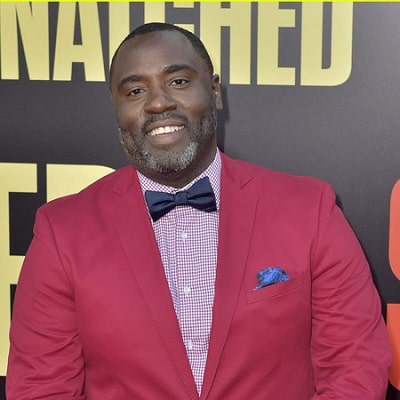 Who is Bashir Salahuddin?

Bashir Salahuddin is an American actor, writer, and comedian who is best known for starring in films ‘Snatched’, ‘Top Gun: Maverick’ and TV series ‘Looking’, ‘GLOW’.

He was born on July 6, 1976, in Chicago, Illinois, USA and raised in the South Shore. Bashir has not disclosed the name of his father and mother. He has seven siblings and one of the brothers is Sultan Salahuddin, who is now a writer while the name and details of his other siblings are not known.

Bashir holds American citizenship but his ethnicity is African-American.

He met fellow writer and friend Diallo Riddle while he was a student at Harvard. Together they created Paper Planes, a production company. Later, he worked as a paralegal in Chicago after graduation before moving to Los Angeles to work in the entertainment industry.

After that, he worked as a substitute teacher while also auditioning as an actor and comedian. Moreover, he was included in the Variety article 10 TV Scribes to Watch.

Bashir Salahuddin and Diallo Riddle wrote half-hour comedy series ‘Brothers in Atlanta’, which was commissioned by HBO on January 2016 but was later canceled.

He has an estimated net worth of around $1 million as of 2022, and he has earned that sum of money from his professional career. Also, he earns around $80k per annum as a salary.

Bashir has been successful in keeping himself far from rumors and controversies in his personal and professional life.

Bashir Salahuddin has black eyes and dark brown hair. But, his weight, height, body measurement, etc. are not available.