Posted by MarriedBiography Posted on August 14, 2019 | In controversy , Married , Relationship
Share this

The 22-years old basketball player won the NCAA national championship in April and he was drafted by the Sacramento Kings in June before he got married.

He represents the Kings at the NBA Rookie Photo Shoot in New Jersey. He took the photoshoot for trading cards and other promotional materials for the league.

There the group came and celebrated his 22nd birthday. He was featured right up front for the group photo and tweeted that his official trading card. Hopefully, he will get some much deserved R&R before the Kings open up training camp which included a pretty extensive international trip.

Kyle Guy’s foul in the match

On the April’s match of the Final, Four Virginia’s Ty Jerome committed a double-dribble. But the referees did not call it and the commentators did not realize it as well. Kyle Guy was fouled and he sank three free throws and the Cavaliers won. Similarly, Parise said of Jermone,

“If he would have just lost the dribble in the backcourt and picked the ball back up and begin dribbling, it would have been an obvious double dribble,”

“I think it was the behind-the-back off the foot while the defender was on him tight – I don’t know if it simulated a deflection, but you very rarely see that situation. I just know for a fact that happens often and it’s not called.”

Kyle thought that there should be no controversy about it.

Is Kyle Guy married to his fiance?

The basket player Kyle Guy is a married man. He was dating Alexa Jenkins since 8th Grade. They have been together since then. Kyle posted a picture on social media proposing his girlfriend. He went down the knees and proposed her. It was on the 18th of February 2018.

After that, they planned to get married on 25th July 2019. Similarly, he uploads the picture of him and his girlfriend on social media quite often. It seems like they have a good bond together. He is spotted many places spending time with his girlfriend, vacationing and spending their free time together.

They had been together for a lot of years. They finally walked down the aisle in Hawaii on 25th July 2019. He has posted the pictures of their marriage. he wore a green-blue color suit and she wore a white gown with a flower headband on her head. They seem very happy looking at the photos.

Kyle Guy was born on 11th August 1997 in Indianapolis, Indiana. He is the son of Katy Fitzgerald(mother) and Joe Huy(father). Similarly, he has five siblings i.e. three brothers and two sisters. He educated from the Lawrence Central High School where he played for the school basketball team. After that, he joined the University of Virginia and was a part of the Virginia Cavaliers men’s basketball.

At present, he is the basketball player for the Sacramento Kings of the National Basketball Association(NBA). He has a two-way contract with the Stockton Kings of the NBA G League. Likewise, he is expected to sign 4 years contract worth of $6 million. He is yet to reveal his net worth and earnings. 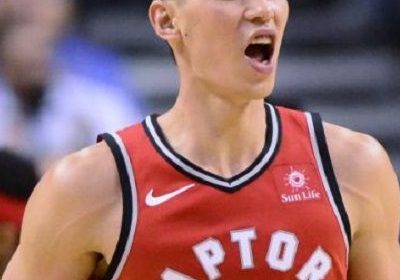