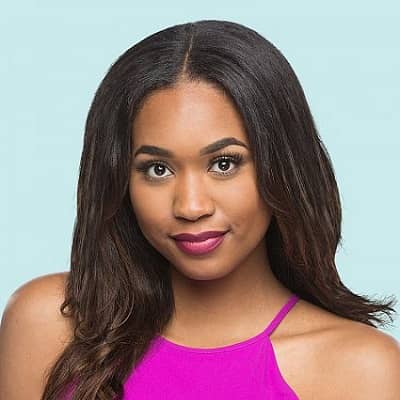 Bayleigh Dayton exchanged vows in a quiet wedding ceremony on 17 Feb 2019. Her husband is also a TV star Chris Williams aka Swaggy C.

Their affair was started on the show Big Brother S20 and on its final episode, they exchanged rings. On the same night, Chris proposed to Dayton and she gave her positive reply.

This couple is enjoying quality time and they often share their romance on social media. Dayton was once expecting her first child but she has to experience a miscarriage on 28 Sep 2018. She was only 6 weeks pregnant.

Who is Bayleigh Dayton?

Bayleigh Dayton is an American TV star and a model who mostly appears in advertisements. She came to the limelight after seen in the hit reality show Big Brother (BB).

She won the Miss Missouri USA contest in 2016.

She was born as Bayleigh Amethyst Dayton on 25 May 1993, in Lees Summit, Missouri, USA. Details about her mother and her father’s names are not shared.

Moreover, she also hasn’t provided the identities of her three older sisters.

Her ethnic background All-American. She studied at Baylor University and got a degree of Bachelor in Business Administration and Management in 2014.

Bayleigh Dayton is a Flight attendant plus a print model. But her popularity came with a show named Big Brother. She has appeared in Season 20 and 22 of this show and has won the hearts of her audience.

In S20 of BB, she reached the 11th position, and then she got evicted. She has spent a total of 51 days at Big Brother’s house. The other participants of this season were Rockstar Lantry, Chris Williams, Faysal Shafaat, Haleigh Broucher, and more.

After this, Bayleigh appeared in the 22nd season. She competed against the stars like Da’Vonne Rogers, Tyler Crispen, Janelle Pierzina, and Kaysar Ridha. But she didn’t win this chapter of BB also and ended up in 12th place.

Besides Big Brother, Dayton has appeared in other screen projects like Return (2014) and The Challenge (1998).

This TV star has an estimated net worth is $1.1 million. Also, as per the sources, she a model receives an average salary of around $53k per year.

This star plus model is doing great in her personal and professional life and is not surrounded by any scandals or rumors.

Talking about Bayleigh Dayton’s body features, she has dark brown eyes and black hair. As per the records, her height is 5 ft 6 inches and her body weight is 55 kg.

Bayleigh is also available on other social sites. Her Instagram account is followed by over 207k followers and she has posted over 286 times.