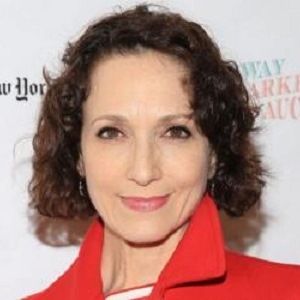 In a really well-written musical, you talk until you just can't talk anymore, you're going to have to sing. And when you're just so full you can't sing anymore, then you have to dance. It's a natural progression

What is the relationship of Bebe Neuwirth?

Bebe Neuwirth married theater director Paul Dorman in 1984. However, the marriage ended in divorce in 1991.

After her divorce, she dated American actor Michael Danek for a while and got engaged to him in 1997.

However, the relationship soured soon. Then, she married Chris Calkins on 04 May 2009. Chris is the founder of ‘Destino Wines,’ a winery in Napa Valley.

She was also linked to TV personality George Stephanopoulos before she got married to her present husband.

Who is Bebe Neuwirth?

Whereas, her other Broadway musical roles include Morticia Addams in The Addams Family (2010). Likewise, from 2014 to 2017, she starred as Nadine Tolliver in the CBS drama Madam Secretary.

Bebe was born in Princeton, New Jersey, the United States on December 31, 1958, to parents Lee Paul Neuwirth and Sydney Anne Neuwirth (mother). She is 63 years old.

Her father is a mathematician and her mother is a painter. Bebe Neuwirth has a sibling namely, Peter Neuwirth. Whereas, she belongs to American nationality and Ashkenazi Jewish ethnicity.

Her birth sign is Capricorn. Talking about her education, firstly, she attended Princeton High School. Then, she attended Juilliard School.

Talking about her professional life, Bebe Neuwirth made her first appearance on ‘Broadway’ as ‘Sheila’ in the 1980 musical ‘A Chorus Line.’ This was followed by her appearance in ‘Little Me’ in 1982 and in ‘Sweet Charity in 1986. Likewise, her work in ‘Sweet Charity was recognized by a ‘Tony Award’ for the ‘Best Featured Actress in a Musical.’

Likewise, she soon made her big-screen debut as ‘Mrs. Evans’ in the movie ‘Say Anything…’ in 1989. Moreover, she also presented a one-woman cabaret show with Scott Cady on the piano, accompanied by musicians such as Kurt Weill, Paul McCartney, and John Lennon, in 2009.

The following year, she was back on ‘Broadway,’ opposite Nathan Lane, in the original production of ‘The Addams Family.’ Besides that, she has also made a few guest appearances on reality shows and brief appearances in several TV productions, including the TV movie ‘Without Her Consent.’

Currently, she is a respected personality in the entertainment world and has a fan base that spans all ages. The theater has remained her first love, but she is comfortable on TV and on the big screen too.

In talking about her lifetime achievements and awards, she won Primetime Emmy Awards twice for Outstanding Supporting Actress in a Comedy Series for Cheers (1982).

There is no information regarding her salary and other earnings. Her net worth is around $ 10 million as of 2022.

On talking about her body measurements, Bebe Neuwirth has a height of 5 feet 4 inches. Additionally, she weighs is 54Kg.

In addition, she has a measurement of 34-24-33 inches respectively. Her hair color is black and her eye color is brown.