Becky G is an American singer, songwriter, and actress. She first gained recognition in 2011 when she began posting videos of herself covering popular songs online. 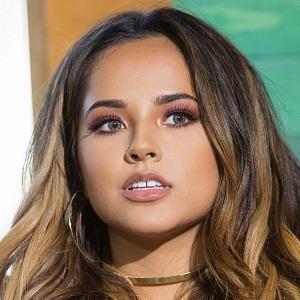 I wrote 'Wish U Were Here' for Cody Simpson, and he invited me to perform with him on tour and be in his music video. He was shy at first. I think it's the surfer boy in him that makes him so mellow.

I love big summer dresses, and it sucks because I'm such a little person, so I always have to be very specific about which ones I put on.

Growing up, my family struggled to make ends meet, so I know how important organizations like The Salvation Army are for families to lean on in times of need.

Sometimes you do get caught up in the midst of becoming... a product, a brand, and not having a say in any of that.

When I get out of work early, or if I have some time before I go into the studio, I go to Disneyland for a few hours with my siblings. We just have fun, go on all the rides together, and eat all of the good food.

Rebbeca Marie Gomez (Becky G) dated singer Austin Mahone from February to August 2015. Later, in April 2016, it was confirmed that Gomez is in a relationship with Sebastian Lletget.

Her boyfriend is a professional soccer player. Neither of them has spoken regarding the future of this relationship. Furthermore, she does not have children from any of her relationships.

Who is Becky G?

She portrayed the Yellow Ranger, Trini, in the 2017 film ‘Power Rangers’. She released her album ‘Play It Again’ in 2013.

Gomez was born in Inglewood, California on March 2, 1997, to parents Alejandra and Francisco “Frank” Gomez. She has two brothers and a younger sister.

She had a rough childhood throughout her early life. She grew up in poverty in Moreno Valley. Furthermore, at the age of nine, her family lost their home and moved into the converted garage of her grandparents’ house.

She is of American nationality. Additionally, she belongs to a Mexican ethnic background.

Talking about her education, Gomez initially attended public school. However, she had to undergo homeschooling due to issues with bullying. There is no further information relating to her additional educational background.

Initially, Gomez came to the public’s attention in 2011 when she began to upload videos of herself covering various popular songs. Eventually, her performance captured the attention of a music producer who then signed her with RCA and Kemosabe Records. Next, in 2013, she released her debut single, ‘Becky From the Block’.

Since then, Gomez has released several hit singles including ‘Can’t Get Enough (Feat. Pitbull)’, ‘Break a Sweat’, ‘Can’t Stop Dancing’, and ‘Sola’. Additionally, her other single ‘Shower’ went platinum twice in the United States. Apart from her musical career, Gomez also has numerous television appearances. She has appeared in television series like ‘Mahomie Madness’, ‘Teens Wanna Know’, ‘Tu did Alegre’, ‘Austin & Ally’ and ‘Empire’. Additionally, she also has a Youtube channel that has over 314K subscribers.

She traveled to Vancouver, Canada to film ‘Power Rangers’. Furthermore, she has collaborated with several artists including Thalia, Yellow Claw, Yandel, Lil Jon, and Frankie J among others. All in all, she has released 16 singles, 13 music videos since her official debut in 2013.

In addition, she has also garnered the Teen Choice Awards nominations. Gomez has not revealed her current salary. However, she has an estimated net worth of around $3 million.

Gomez became part of a controversy after she was Kicked off stage at a Fifth Harmony concert. Furthermore, her role in ‘Power Rangers’ also attracted some controversies after it included the first openly gay Ranger.

Currently, there are no rumors concerning Gomez and her career.

In addition, her hair color is black and her eye color is dark brown.

Gomez is quite active over social media. She has a huge number of followers on social networking sites such as Facebook, Twitter as well as Instagram. She has more than 2M followers on Twitter.

You may also know about Astrid Loch, Kaitlynn Carter, and Nicole Lopez-Alvar.

The Mexican-American Singer Becky G!! Here Are Some Lesser Known Facts About The Pop Singer