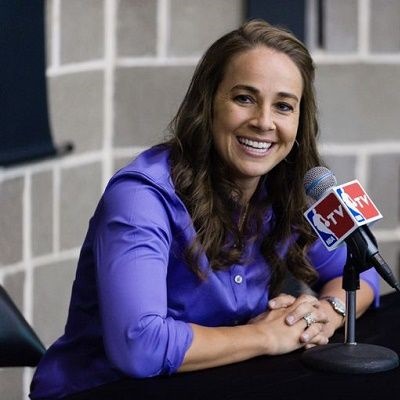 I'm partnering with @Brawny to share my shero. Mine has always been my mom, Bev. She is my biggest support &

has inspired me to achieve my dreams. Share your shero with #StrengthHasNoGender!

What is the relationship of Becky Hammon?

Becky Hammon seems to be single currently and has no any rumors regarding her affairs at the current time. She is focused on her career at the moment. She enjoys her career as a coach and prefers to be single and waiting for her right moment.

Who is Becky Hammon?

She is a Russian-American assistant coach of the National Basketball Association(NBA) sports for the San Antonio Spurs.

Becky was born to her parents Bev and Martin Hammon on 11th  March 1977, in the United States in the city of South Dakota called Rapid City. She has a brother, Matt Hammon, and a sister, Gina Hammon.

In which school did Becky Hammon attend?

Becky attended Stevens High School located in her hometown of Rapid City, South Dakota where she played basketball and was named South Dakota Miss Basketball as a junior.

When she became a senior she got a vote for the South Dakota Player of the Year after averaging 26 points, 4 rebounds, and 5 steals per game. In 1995 she graduated as well as voted the female class athlete by her graduating class.

Hammon was selected to the Colorado State University Sports Hall of Fame on November 12, 2004.

Moving onto her career line, her career got a platform from the colleges and schools.

Hammon joined the New York Liberty signing to the WNBA on May 12, 1999. She is praised for scoring from both ends of the court and her aggressive style of play which made her famous among the Liberty fans.

Hammon signed with the Colorado Chill, a new team in the NWBL in 2004 but played only two games because of an anterior cruciate ligament injury in her right knee sustained in the 2003 season when playing for the Liberty.

Hammon scored their 2,000th WNBA career point on August 16, 2005. She was traded to the Silver Stars, along with a second-round draft pick in the 2008 draft, for the second overall first-round pick in the 2007 WNBA Draft, center Jessica Davenport n April 4, 2007.

Hammon had a dream of becoming a coach after her playing career.

Hammon was further honored with the announcement that she would be inducted into the Colorado Sports Hall of Fame with Hammon’s outstanding coaching, and her selection as ESPN’s Woman of the Year.

Hammon became the first-ever female head coach in the NBA’s Summer League on July 3, 2015. Hammon was interviewed for the open position of the Milwaukee Bucks general manager of the team on June 2, 2015.

She won World League Championship with CSKA in 2007. She kept the record in the Guinness World Record as the Freest Throws Made in a Minute (women’s category) hitting 38 of 42 attempts in the allotted 60 seconds on February 16, 2008, at the NBA All-Star Jam Session.

She also won the Cup of Russia with CSK and won the 2008 Haier Shooting Stars Competition along with David Robinson and Tim Duncan in the year 2008. She also won NBA Summer League Championship coaching the San Antonio Spurs Summer League Team 2015.

How much does Becky Hammon earn?

There was a rumor about her affair with Tony Parker in 2011 but could not be proved. Tony is a basketball player.

Becky was pushed into controversy for being unpatriotic after she became a citizen of Russia.

Becky is 5 feet 6 inches tall with 62 kg weight. She is blond with light eyes.