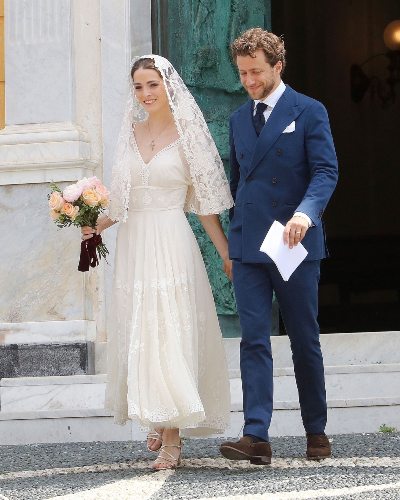 Bee Shaffer became a mother for the first time. The daughter of Anna Wintour welcomed her first baby boy with her son Oliver Sozzani with her husband Francesco Carrozzini on 25th October 2021. Bee attended the 2021 Met Gala in New York City smiling in a flowing, seafoam green dress.

During her pregnancy, she attended the US Open with mother Anna at the USTA Billie Jean King National Tennis Center in New York City. She wore a navy and pink polka dot maternity dress.

Bee Shaffer and Francesco Carrozzini had two wedding ceremonies. The couple walked down the aisle on 7th July 2018. Her wedding was an intimate celebration at Wintour’s home in Mastic, New York. During the wedding guests were banned from using social media.

The couple’s second wedding was held in Portofino, Italy. They married for the second time in front of a small group of family and friends which included Carla Sozzani and  Carrozzini’s aunt. The bride wore an ivory V-neck lace gown with a tea-length skirt and matching lace veil. Likewise, she accessorized her look with a cross necklace and gold strappy sandals.

Francesco went for a navy double-breasted suit with brown loafers. Likewise, their engagement was in March 2017 and she wore her engagement ring to the Met Gala 2021. Her husband Francesco is an Italian-born director and photographer. His work has featured on the covers of Vanity Fair, New York Magazine, Vogue, and many other magazines.

London-born Anna Wintour is a renowned personality as the chief editor of Vogue magazine. Widely praised in the fashion world, she is also a fashion journalist and is major supporting personnel for young aspiring fashion designers. She is also known for her trademark of pageboy bob haircut and dark sunglasses. Read more bio…