The Bachelor's contestant, Bekah Martinez is an American reality star. She is dating her boyfriend since May 2018 and has a daughter and a son. 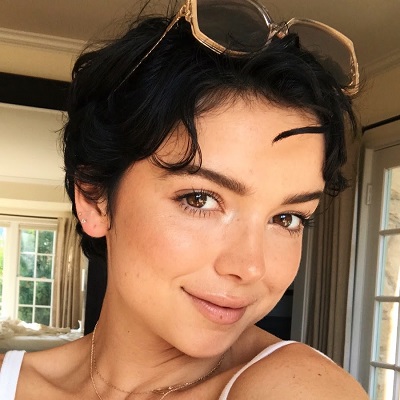 "I don’t care what the circumstances are. This is gonna work."

"Grayston has a curiosity about the world and zest for life. And that’s what’s really important to me. He’s just totally himself and doesn’t give a sh*t about what anybody else thinks, and I really like that about him."

"It’s the one thing that I’ve known with certainty for so long. I’ve gone back and forth on the idea of marriage and relationships, but I’ve always felt sure that I want to be a mom."

Bekah Martinez is in a relationship with her boyfriend Grayston Leonard, who is the founder of Long Beach Rising Climbing Gym, California.

They are dating each other since May 2018. The duo first met at a local rock climbing gym where Leonard worked before. They together have a baby girl named Ruth Ray De La Luz Leonard.

Bekah is pregnant for the second time and in April 2020, she revealed the sex of the baby. She welcomed her son Franklin James in June 2020.

Who is Bekah Martinez?

Bekah Martinez is a reality star and model from the United States. She came into the limelight after appearing in the reality show ‘The Bachelor‘ season 22.

Her popularity increased due to her charming personality and unique style especially her pixie haircut that was even written by People magazine. She is the co-founder of a podcast named chatty broads.

Bekah Martinez was born on 10th February 1995 in Fresno, California, USA. Her parents’ and ethnicity details are not revealed but she has four siblings.

Among them, Jeol Martinez is her brother and Rachel is her sister’s name. While living in Fresno, she worked as a nanny for a long period of time. Currently, she lives in Los Angles, California.

About her education, She attended her high school in California and completed her graduation from the University of California.

Bekah Martinez was cast in the show in December 2017 and was one of the 29 women on the show to compete for the former race driver and real estate agent Arie Luyendyk Jr.

The reality star’s net worth is around $1 million. The reality show ”The Bachelor” paid her $100,000 for the whole show.

Sh also earns around $500,000 annually from her Instagram posts.

Bekah Martinez has a height of 5 feet 5 inches and she weighs around 55 kg. She is slim with a banana-shaped body and she has a pixie style haircut.

Her body measurements are 34-25-34 inches. She has black hair with dark brown eye color.

She is a free-spirited girl who doesn’t like to wear bras. She likes rock climbing and spending time with her siblings.

While being in the reality show ”The Bachelorette” she created a lot of controversies in the show for not revealing her real age. It is because the average age for the show was 27 years.

You may also know about Astrid Loch, Tami Roman, and Doug Hehner.