Bella Hadid is a fashion supermodel who posed for Tom Ford, Diane von Fürstenberg, etc. She is possibly single.

Bella Hadid is currently single. She was rumored to be dating DJ Daniel Chetrit. But she tweeted that she is currently happily single and committed to her herself.

Bella was in a relationship until 2016. She was dating her ex-boyfriend The Weeknd who is an R&B singer from 2015. They were first seen together at Coachella in April 2015.

In February 2016 Grammy red carpet event, they came together and opened up about their relationship. But due to some differences, the couple broke up in November.

However, they again got back together and again broke up in 2019.

In November 2011, she had dated Duke Conrad but they also broke up after a year of their affair. They broke up in 2013. 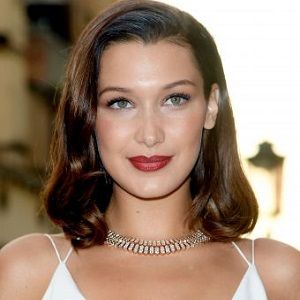 I think there's a right time for everything, and I'm a true believer that everything happens for a reason.

If I don't book a job, I like to see it not as a rejection but as a redirection to something different.

I definitely have my Palestinian gene. I love to play host.

Who is Bella Hadid?

Bella Hadid is a fashion supermodel from America. She is well-known for modeling with IMG Models. She has also modeled for Tom Ford, Diane von Fürstenberg, etc.

In 2016, she was voted Model of the Year for Model.com Awards, she was ranked one of the top 50 models too.

She was born in New York City, New York, U.S. on October 9, 1996. She is the second child of Mohamed Hadid(father) and Yolanda Hadid(mother). Her birth name was Isabella Khair Hadid.

Her nationality is American and her ethnicity is mixed (Palestinian Dutch American).

Bella’s mother Yolanda is a reality star on the television series Real Housewives of Beverly Hills. She has an older sister named Gigi Hadid and a younger brother named Anwar Hadid. They both are also in the modeling field. She has a stepfather who is a music producer and his name is David Foster.

She was bought up in a place called Santa Barbara in California till the age of 10.

Bella began competing in horse riding when she was only 3 years old. She is a nationally ranked equestrian. Hadid graduated from the Parsons School of Design. Since childhood, she was interested to perform in front of the cameras.

Bella Hadid moved to New York to begin her modeling career. Hadid started modeling at 16 years old and in 2014 she made her New York Fashion Week debut.

She has strolled for some planners including Diana von Furstenberg, Marc Jacobs, Chanel, Balmain, and Tommy Hilfiger. Hadid has been on the front of a few magazines including Seventeen, Elle, Teen Vogue, and Vogue Australia.

She won Model of the Year at the Daily Front Row’s Fashion Los Angeles Awards in 2016. In 2015, she won Model.com’s Break Out Star: Women’s Award for Reader’s Choice Category. In March 2016, she walked for Paris fashion week for the brands like Givenchy, Chanel, and Miu Miu.

She opened the Versus Versace show during the London Fashion Week. She walked into Victoria’s Secret Fashion show in November 2017. In the same year, Hadid’s first Front of the year was for Jan.

She has launched her fashion clothing line Robert Riley’s.

Rumors are that she is having an affair with DJ Daniel Chetrit. But recently, she denied the rumors and announced on Twitter that she is in a committed relationship with herself & her happiness for now.

Bella was hoping that she will be on Vogue Arabia’s cover. But her sister Gigi Hadid caused the controversy when she was on the cover of September 2017 Vogue Arabia instead of Bella.

In 2014, there was a controversy when Bella was arrested and charged with Driving under the influence(DUI.) As she was suspended from driving for a year and six months under probation.

Bella Hadid has a beautiful and slim body with a weight of 55 kg and her height is 5 feet and 7 inches tall. She has a sexy body figure and measures 34-24-34 inches and she wears a bra size of 32B.

Bella has a natural blonde hair color but has dyed it brown to make it distinct from her sister Gigi. She has blue-green eye color. Her dress size is 4(US) and her foot size is 6(US.)