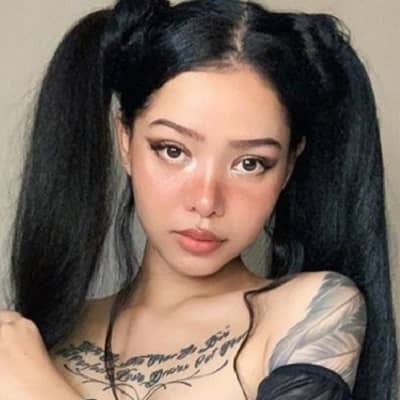 Bella is single currently. She hasn’t addressed any relationship in the media yet.

Who is Bella Poarch?

Bella Poarch is a Tik Tok sensation and a social media influencer. In a short san, she amassed great followers when one of her TikTok videos went viral.

Besides, social media, she served in the US Navy.

Bella was born on 8th Feb 2001 in the Philippines. She is of American nationality and belongs to Filipino descent.

Bella’s real name has come under mystery after her photo in U.S. Navy uniform was seen. It has  her last name as “Taylor.”

Likely, the URL of her Facebook account also ends in Taylor Nariee. And so, it hints that Bella Poarch can not be her real name. Although the exact information is not known.

The names of her parents are not disclosed. Bella grew up in the Philippines and later moved to Hawaii with her family. In a Q&A in TikTok, she told me that she has a rough childhood. Although its details are not available.

Bella joined TikTok just in April 2020 and quickly skyrocketed to fame. In less than eight months, she amassed more than 40 million followers on her TikTok account.

Her lip-syncing to the song “M to the B” went mega-viral which was her breakthrough. Her following increased exponentially, making her one of TikTok’s most popular stars.

The TikTok star posts various cute, lip-sync videos, dance, and on trends videos.  She also used to post various gaming content before. Her first-ever TikTok video is about gaming.

She hasn’t yet uploaded any videos although it has 262k subscribers. Bella has mentioned “coming soon” in the description. She may be coming up with videos on Youtube soon.

Apart from social media, Bella has served in the US Navy. She has posted photos on her uniform.

With 39 Million followers in two months on TikTok, she must have gained a good amount from Tiktok. As of now, her net worth is said to be around $500,000.

Bella was in the 11th position in the follower-count rankings. With an engagement rate of around 15%, she earns up to $30,000 per sponsored post on TikTok.

Bella has been involved in various controversies.

The star has a “rising sun” flag tattoo on her body which causes drama over the internet. The specific tatto0 was a sign of Japanese imperialism for many South Koreans. The specific tattoo is considered a hateful reminder of human rights abuses. Being a part of history it became controversial. Afterward, the social media star tweeted an apology to fans and cleared that she was unknown about its history and meaning. Likely, in October, she covered it and also shared it photo.

Talking about another controversy, Bella was accused of using a racist nickname on social media when she referred to her one Black friend as “Harambe,” It was the name of a gorilla who died after a young boy climbed into his enclosure in 2016.

Following, she was also linked with BAS media and told that it affiliated her into fame. There were possibilities about Poarch being employed by BAS.media to allegedly promote music from Columbia Records. Poarch and BAS media have not responded ever and it is only a controversy addressed.

Even though she has faced various criticism, she has been popular and receiving fame.

Similarly, she has a beautiful face with black hair and dark brown eyes. Bella is an avid tattoo lover and has many around her body.

Likely, her official Tik Tok account also holds 56.5 M followers with more than 1.2B likes. Similarly, she has her own YouTube channel with 262K subscribers.

Also, get to know about A6d, Lucas Ollinger,  Hailey Sigmond, and Lewis Sharp.