The young and beautiful actress, Bella Thorne is engaged to an Italian pop singer Benjamin Mascolo on March 21, 2021. The couple were dating since April 2019.

Benjamin proposed to her with a stunning pear-shaped halo diamond engagement ring. The couple are soon to get married and their wedding will be held in Italy and in America.

She was in a relationship Mod Sun in 2017, however, they broke up in April 2019 after dating for two years. The break up was announced by Bella via her Instagram handle.

Despite her young age, she has been in a number of relationships until now. She dated the American songwriter Nat Wolff, American actor Jake Austin, and the famous American actor, Kenton Duty for a short period of time in 2010. After that, she dated another American actor, Garrett Backstrom for a year and broke up in 2011.

She was in a serious relationship with Tristan Klier from 2012 to 2014. After that, she dated Brandon Thomas Lee for a year in 2015 and again ended with a breakup in 2016.

She dated the handsome American actor, Tyler Posey for a year in 2016 and she hooked up with Charlie Puth, an American singer in late 2016.

At the beginning of 2017, she dated Sam Pepper, a famous British YouTube personality for a short period of time and broke up after a few months. Bella has been single since her breakup with Sam. Since the last couple of months, Bella has been seen around many places with Scott Disick. She was also seen getting cozy with rapper Blackbear. She had also opened up about her bisexual behavior. 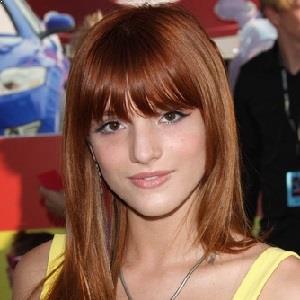 Don't try to impress people. Always be yourself

Everyone suffers some injustice in life, and what better motivation than to help others not suffer in the same way

I have suffered from bullying in many ways, from bullying in school due to my disability in reading, to digital abuse that I deal with on a daily basis. I'd like to tell the kids that are being bullied that no one should have to deal with the abuse, ever!

Who is Bella Thorne?

Bella Thorne is a young American Entrepreneur, actress best known for her role as Ruthy Spivey on the television film My Own Worst Enemy (2008).

She is also widely recognized for her lead role as CeCe Jones on the Disney Channel series Shake It Up (2010-2013).

Bella Thorne was born on 8 October 1997, in Pembroke Pines, Florida, United States. She is an American by nationality and she is of mixed ethnicity(Cuban, Irish, Italian, English, German, Welsh).

Her birth name is Annabella Avery Thorne. She is the youngest daughter of Tamara Thorne and Reinaldo Thorne. Her father was of Cuban descent and her mother is of Irish, English, Italian, and other descent.

Her father died in a motorcycle accident in 2007. She has two sisters named Dani and Kaili and a brother named Remy. Her all siblings are well-established actors of America.

When she was in the first grade, was diagnosed with dyslexia. She was taught at home. She was interested in acting and modeling since her childhood.

At the age of six weeks old, Bella shot her first pictorial for “Parents Magazine”. Since then, she continued to grace the covers of many national and international magazine and catalog covers.

Bella has been an active member of the industry since 2003. She made her debut in acting playing a small role as a sideline fan in Stuck on You (2003).

She got her first big break in the TV film Dirty Sexy Money (2007-2008) in which she played Margaux Darling. Her first major role was highly appreciated by the fans and audience which earned her other major roles in movies and TV films.

In 2009, Thorne won Young Artist Awards for her role in My Own Worst Enemy.

She won the award for the second time in 2011 for Shake It Up. Her roles in Big Love and Shake It Up earned her several awards and honors.

She won the Imagen Awards-Best Young TV Actress award for her role in Shake It Up. Her role, Madison-Morgan in The Duff (2015) earned her Teen Choice Awards in 2015.

Recently, she appeared as Paige Townsen in inFamous in Love (2017), and her more than five movies are in post-production.

She has a net worth of $ 12 million but her salary is not revealed yet.

Her net worth increased by $2 Million after she joined OnlyFans.

She owns a house worth $2 Million in Sherman Oaks, California which she bought in 2016. Moreover, in 2019, she purchased a secluded mountaintop estate in Topanga, California worth $3.3 million.

She was rumored to have hooked up with Ryan Nassif, an American model in 2015 but none of them confirmed the rumor. Bella is also rumored to be in a same-sex relationship with the American model, Bella Pendergast but the rumor has not been confirmed yet. Bella had tweeted about her bisexual orientation.

Bella has a height of 5 feet 6 inches. Her body weighs 55kg. She has dyed red hair and dark brown eyes. Her bra size is 32B, her shoe size is 7.5US and her dress size is 4US. Furthermore, her body measurements are 36-26-37 inches.

Tags : Actress My Own Worst Enemy Shake It Up