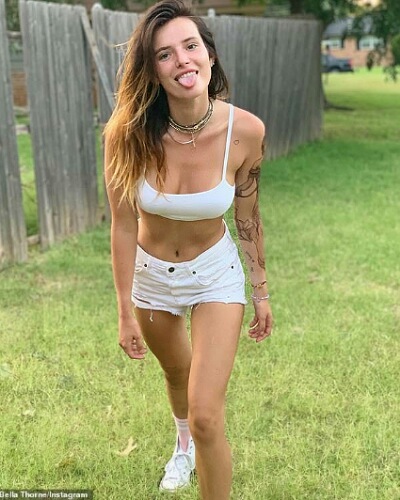 Bella Thorne and her new girlfriend at Toronto airport

This Sunday afternoon, Bella had uploaded a topless picture of herself with her new girlfriend on her Instagram. Both were in bed together having fun. But the picture did not reveal the face of her girlfriend. Bella justified it by writing that her girlfriend is very shy. She did not also mention her name.

But now media photographers have seen her at Toronto International Airport with the same woman and the world now knows who she actually is. Her name is said to be Alex Martini. The two were holding hands as they exited the said airport probably for an adventure together.

More about the couple Bella-Alex

Bella, 21 was wearing a cozy black sweatsuit. It was an over-sized back sweatshirt with track pants which matched it. Besides, she had fuzzy black slides and socks on. Bella had covered her Auburn hair in a grey beanie which had the Canadian flag in front of it. There was no makeup on her face.

She was walking hand-in-hand with Alex through the airport terminal. Alex Martini is a set production assistant. Bella also had her pet pooch Tampon with her and it was in a pink leash walking beside her. She was in high spirits.

Alex was in a grey ensemble with skinny jeans and a zipped up hoodie. Bright yellow Converse trainers covered her feet.

After this appearance at the Toronto International Airport, Bella posted more pictures of herself on her social media. In one of this picture, she was in a white bra and white shorts. She captioned this snap:

Bella continues to date her new boyfriend Italian Benjamin Mascolo. He is part of the Italian pop duo called Benji and Fede. Unperturbed by Bella’s new lesbian relationship, he had put a positive comment on the Sunday’s Instagram topless picture of Bella Thorne with her new girlfriend. He had said that they both look very cute. He and Bella are dating since April 2019 after she broke up with rapper Mod Sun after a trivial fight. Earlier, she also split from her girlfriend Tana Mongeau who is now married to YouTuber Jake Paul. But the wedding has been dubbed as fake though the couple has denied it.

Bella Thorne is a young American actress best known for her role as Ruthy Spivey on the television film My Own Worst Enemy (2008). She is also widely recognized for her lead role as CeCe Jones on the Disney Channel series Shake It Up (2010-2013). More Bio…