Updated On October 12, 2022 | Published By: Brandy Stratton | In Dating , Divorce , Relationship
Share this 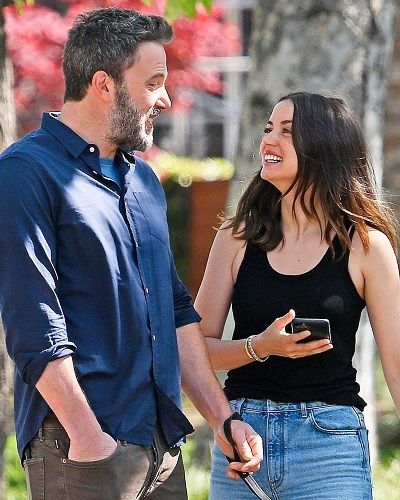 Update 2022: Ben and Ana are no longer a romantic couple. The two called it quits in January 2021. Following their sepeartion, Ben is married to on-again and off-again girlfriend Jennifer Lopez. The two got married in April 2022. Ana, on the other hand, is dating an executive of Tinder, Paul Boukadakis.

“Thank you all so much for the birthday wishes and love! Cheers to another great year,”

Thank you all so much for the birthday wishes and love! Cheers to another great year. ???????✨? Gracias a todos por los mensajes de cumpleaños y el amor. Un brindis por otro año maravilloso.

The two couple Ben and Ana first met each other while they were filming for Deep Water in New Orleans. They have been together and have been spotted together many times. However, they had not confirmed dating each other.

Similarly, they were spotted strolling in Havana, Cuba and they later enjoyed a beach vacation in Costa Rica. At present, they are staying together in quarantine.

They are in Santa Monica, California seen walking her dog and picking up coffee. They are happy together and have made an appearance together as well.

Ben and Jennifer Garner started dating each other in the year 2004. After that, they married in 2005. Together they have three children Violet Anne, Seraphina Rose Elizabeth, and Samuel Garner.

But their marriage ended in 2015. They separated and their divorce was finalized in the year 2018. Ben opened up about his divorce saying it was the biggest regret of his life. He said,

“I drank relatively normally for a long time,”

“What happened was that I started drinking more and more when my marriage was falling apart. This was 2015, 2016. My drinking, of course, created more marital problems.”

He never thought that he was going to get divorced from Jennifer. Ben said,

Even though they have been divorced but they share a good bond. They have been photographed together as well. Likewise, Ben has dated a number of females including Cheyenne Rothman, Gwyneth Paltrow, Jennifer Lopez, and Lindsay Shookus.

Ben Affleck is an American actor and filmmaker. He began playing Batman in the DC Extended Universe. Additionally, he has appeared in several other movies including Gone Girl, Lives by Night, The Accountant, and Pearl Harbor among others. Read more bio…

Ana de Armas is popular as Ana Celia De Armas Caso. She is a Cuban – Spanish actress. In 2006, she made her acting debut in the Spanish film Una Rosa de Francia. Read more…