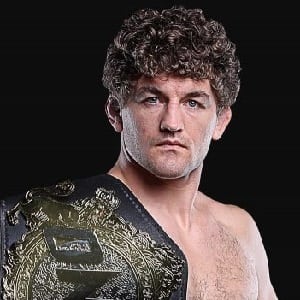 I think every promoter's job is to pump their athletes up. Like, you see, Dana White did it all the time with branding people: all of a sudden, they're the best thing since sliced bread, just because that's the promoter's job

While it may not have been the flashiest or the most creative, I brought a very unique skill set, and I executed in a fashion that very few have done before me and, I think, very few will do after me

People are stubborn, and sometimes even if change is good, people will always oppose change.

What is the relationship of Ben Askren?

His wife Amy is a licensed estate agent at Firefly Real Estate.

The couple has three children: two daughters, Alex and Andy, and a son Ozzi.

He resides with his wife and kids.

Also, he owns a dog, Ragnor of cane Corso breed.

Who is Ben Askren?

Currently, he remains undefeated as a professional.

He was born to parents Chuck and Michele Askren.

Additionally, he developed an interest in the world of fighting since his childhood years and hence began fighting at an early age.

He is of American nationality and his ethnic background is Cuban.

In addition, he was also an American amateur wrestler for the University of Missouri. He won the state championship two times at Arrowhead High School in Hartland.

Furthermore, he also went undefeated again with a record of 42–0in his senior year.

Coming to his MMA career, Askren made his professional MMA debut on February 7, 2009.

Currently, he is an active submission wrestler. In addition, he is a self-proclaimed black belt. Askren also competed in the 2009 ADCC Submission Wrestling World Championship.

He signed a 2-year/6 fight contract with ONE Championship on December 9, 2013.

UFC announced on November 3, 2018, that they have signed under the trade UFC and One Championship agreement.

Additionally, he has also won the ONE Welterweight Championship.

He won the gold medal at the 2005 Pan American Championships Senior Freestyle.

Askren has not revealed his current salary.

Whilst, his estimated net worth is $500 thousand.

Askren was part of the controversy recently due to his Twitter beef with another American mixed martial artist Dillon Danis.

Additionally, his 2015’s One FC fight also ended in controversy.

Talking about his body measurement, Ben Askren has a height of 1.78 m. Additionally, he weighs around 77 kg. Furthermore, his hair color is dark brown and his eye color is blue.