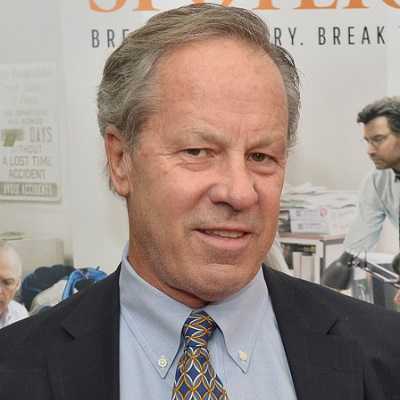 Ben Bradlee, Jr. is happily married to Cynthia Hickman. The couple got married in February 2018.

Previously, he was married to Janice Saragon. They married in 1990. After 25 years of marriage, they got separated from each other after 25 years in 2015.

Prior to that, he married the broadcast journalist, Martha Raddatz. Details on their wedding and divorce are not available. From the wedding, he has a daughter named Greta Bradlee.

Apart from Greta, he has two other children.

Who is Ben Bradlee, Jr.?

American Ben Bradlee, Jr. is a journalist and writer. Bradlee is renowned as a former writer and editor of the American daily newspaper, The Boston Globe.

Also, he is famous as the writer of the biography of the baseball player, Ted Willams.

Ben Bradlee, Jr. was was born on 7th August 1948 in Manchester, New Hampshire. His birth name is Benjamin Crowninshield Bradlee Jr. He is of British-Irish ethnicity.

He happens to be the son of Benjamin Crowninshield Bradlee (father) and Jean Saltonstall (mother).

His father, Lt. Benjamin was the most prominent journalist of post-WWII. His parents got separated from each other when he was just 7 years old.

He has three siblings including his younger half-brother, Quinn Bradlee. Quinn is a professional filmmaker and author.

Inspired by his father, he was highly inclined towards journalism since his teenage days. Moving to his academics, he attended Colby College.

After graduation from the college, he worked as a volunteer for the independent agency, Peace Corps in Afghanistan.

After that, he joined the daily newspaper, The Press-Enterprise in California. Eventually, he quit his job in the newspaper to join The Boston Globe.

He spent 25 golden years of his career in the newspaper. His journey in the firm started as the State House Reporter and became the metropolitan reporter.

In the year 1993, he was promoted to be the Assistant Managing Editor for investigations and projects. Some of his projects include the Roman Catholic Archdiocese of Boston.

In 2004, he left his job in Globe to write the biography of Ted William. That took him ten years to research in-depth. The book was released in 2013 with the name, The Kid: The Immortal Life of Ted Williams. The book became the New York Times Best Selling.

In 2016, he became the Board of Trustees for the Boston Public Libary. Some of his other books along with the year and the publication house are-

Besides that, he also earns through the royalties of his book.

He has brown eyes with light hair. He has decent height and weight. However, details on his body stats are not available.

To date, he has been through any sort of controversy and scandals that created headlines in the media. Besides that, he has managed to maintain distance from any sort of rumors.

On Twitter, he is following the personalities including Andrea Mitchell, Bernie Sanders, and Robert Reich.

You may also read the bio, age, parents, career, net worth, salary, and social media of Adam Fleming, Matte Babel, and Gloria Riviera.