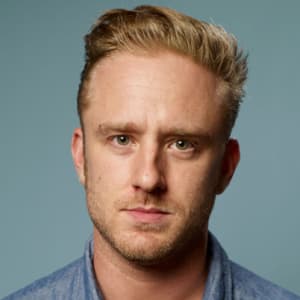 "In the novel, my character was written as a 400-pound, 30-year-old massive force. Since I am not that, I had to find a different direction. I based my character on a serial who saw his parents die and now has a fetish for little girls and watching people die."

Ben Foster was in a relationship with Kirsten Dunst in 2000. The couple broke up after a year.

Zoe Kravitz was in a relationship with Ben in 2007. They were together for a year too/ On 2011, he reportedly dated Jenna Danneberger.

He started having an affair with Robin Wright the same year and they got engaged in 2013. Their engagement lasted until 2015.

In October 2016 he proved his off-the-market status by getting engaged to actress Laura Prepon and they have a daughter named Ella in August 2017. They got married on 03 June 2018.

Who is Ben Foster?

Ben Foster, also known as Benjamin A. Foster, is an American actor, who is known for his intense performance in ‘Alpha Dog’, ‘The Messenger’, ‘Ain’t Them Bodies Saints’, ‘Hell or High Water’, etc.

He became the nominee for a Saturn Award and a  Satellite Award for his role in 3:10 to Yuma(2007) and won an Independent Spirit Award for portraying Tanner Howard in Hell or High Water.

Ben was born on October 29, 1980, in Boston, Massachusetts, USA. His nickname is Goat Boy. His birth sign is Scorpio. He is of mixed (English, French, Irish, Welsh, and Scottish) ethnicity and American nationality.

His father’s name is Gillian Kirwan and his mother’s name is Steven Foster. He has a brother named Jon and does not have any sister.

His family shifted to Fairland, Lowa after his home was broken into by robbers.

He attended the Maharishi University Of Management while living in Fairfield. His information about education is still under review.

Ben Foster debuted as an actor when he was 16 years old. He starred in the Disney Channel television series ‘Flash Forward’ in 1996 and 1997.

His debut film was a small role in the little-seen Kounterfeit in 1996 and acted in Liberty Heights in 1999. His first starring movie role was in the film Get Over It in 2001, where he starred as a lovelorn teenager. He played a small role until 2005, but he showed his intense piece of acting in the movie Hostage in 2005 and people began to take notice and recognize his potential and talent.

Ben played a cold-blooded killer and outlaw in Charlie Prince in the Western film 3:10 to Yuma in 2007. His memorable films include ‘The Mechanic’ in 2009, crime drama ‘Contraband’ in 2012. He played Lance Armstrong in the biopic ‘The Program’ and co-starred in the fantasy adventure ‘Warcraft’, released in June 2016.

He was described as one of the actors who make a bad film worth seeing for his intense and unhinged performances in numerous films.

He has won several awards and has been nominated numerous times. He has been awarded the Young Hollywood Award for Breakthrough Performance for the movie ‘Alpha Dog’, Women Film Critics Circle Award for Best Actor for the movie ‘The Messenger’.

Moreover, he was awarded Independent Spirit Award for Best Supporting Male for the movie ‘Hell or High Water’, Screen Actors Guild Award for Outstanding Performance by an Ensemble in a Drama Series for the movie ‘Six Feet Under’, etc.

There were rumors coming around that Ben dated actress Julia Stiles, but she denied the relationship with him. From 2006 to 2007, he was also rumored to be dating Ellen Page.

The relationship, however, was not confirmed.

This actor has a net worth of around $20 million and his salary is 1.4 million dollars annually.

Ben Foster has a height of 5 ft. 9 inches and he weighs 73 kg. His hair is dark brown and his eyes are green. Other information about his body description is still under review.