Ben Foster is an English soccer player. He is married and a father of two.

Ben Foster is married to Kate Foster. His wife Kate is a psychologist.

Being a very private couple, they have not shared any details regarding their wedding date and the story behind it.

They are blessed with two children. He has a son Louie and a daughter Olivia born in 2008.

Apart from football, he is passionate about cycling too. 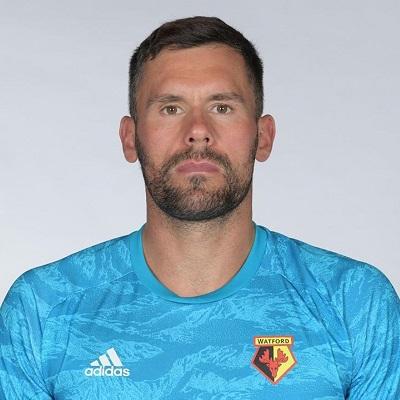 Little things like that are priceless. The kids soon bring you back down to earth.

I don’t think my kids know what I do, to be honest. They know I play football, but that’s about it.

My little girl has just started at pre-school and on the first day the teacher was asking the children what their daddies did. She said ‘My daddy plays football’ and the teacher said, ‘What, at weekends with his mates?’

Who is Ben Foster?

Ben Foster is a professional footballer. He is renowned for his defective playing style as a Goalkeeper in Premier League and international games.

Currently, he is playing for the British Football Club, Watford.

Ben Foster was born as Ben Anthony Foster on the 3rd of April 1983 in Leamington Spa, England. He is of English ethnicity.

To date, he has not shared any details about her father and mother.

He has three siblings including two brothers, Brett and Adrian, and a sister.

In 2000, Ben Foster started his professional career as a football player with the Racing Club Warwick as a goalkeeper. However, in April 2001, he joined the English football club, Stoke City. With the club, he played for the four-season till 2005.

After that, in 2005, he joined Manchester United and played for the club till 2010. However, in between, he signed with Watford two times as a long-season loan. On the 26th of May 2006, he was named on the 2006 FIFA World Cup as a stand-by player.

In 2010, he signed a three-year contract with the club, Birmingham City. However, on the 29th of July 2011, he signed with West Bromwich Albion as a loan replacing the Albion goalkeeper Boaz Myhill for a year. In the year, he played around 37 league matches out of 38.

After that, in 2012, he permanently signed with Albion and played for the club till 2018. For his performance in the season 2016-17, he was nominated for the Footballer of the Year award by the Football Writers’ Association.

On the 5th of July 2018, he signed a two-year contract with Watford.

He has managed to remain far from any sort of controversy that created a buzz in the media. Similarly, there are no rumors linked with him.

However, in May 2011, he surprised everybody taking retirement from international football. Despite that, he returned to his international career with the 2014 FIFA World Cup.

Ben Foster is a brown-eyed and black hair man. He stands at a height of 6 feet 4 inches and weighs around 90 kg.

Talking about his appearance, he has sharp looks with a square-shaped facial structure. He prefers to have a short haircut with slightly grown facial hair.