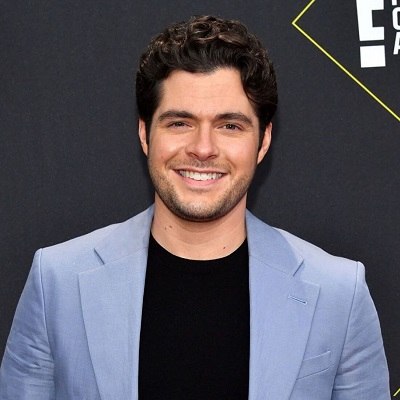 Ben Lewis is happily married to the actor, Blake Lee. The couple married on the 17th of January 2016. The lovebirds first met at the bathroom of Grauman’s Chinese Theatre.

At the time, he took an opportunity to talk with Lee who introduced himself as an actor. Eventually, the couple started dating each other. After dating several years, they tied the wedding knot and took vows as grooms.

As of now, the couple is happily married to each other.

Who is Ben Lewis?

American Ben Lewis is an actor and writer. He is renowned as Other Scott of Scott Pilgrim Vs. the World, Alan of Zero Recognition, and William Clayton of Arrow.

Last, in 2020, he appeared in The High Note as Chad. Next, he will be sharing the screen with his spouse, Blake Lee in the movie, A Christmas Set Up.

Ben Lewis was born in Canada. He is of Irish-Scottish ethnicity.

Being a private person, he has not shared any details on his family background including his father, mother, and siblings. However, he has shared the pictures of his father and his two siblings on Instagram including a sister and brother.

Talking about his educational background, he is a graduate of the National Theater School of Canada.

In the mid-2000, Ben Lewis stepped into the entertainment sector in some small characters that include the Pizza Boy in the movie, The House Next Door, and Teddy Jones Jr. in the series, Murdoc Mysteries who killed his father’s murderer.

However, he first came in the limelight with the movie, Scott Pilgrim vs. the World as one of the Scotts. The character became one of the milestones in his career. Moving forward, he landed the role of the Boddy Beckoridge in the series, Degrassi: The Next Generation.

Following that, he mostly featured the short movies including the Seven Sins: Lust, Her Eyes, Issues, Gaysian, and many more. Moving forward, he featured in some series including Chasing Life, Designated Survivor, and The Handmaid’s Tale in some supporting characters.

In 2018, he joined the series, Arrow. In the adventure action drama, he portrayed the character of Adult William Clayton. As of now, he has been an a part of 20 episodes of the series. Last, he appeared in the movie, The High Note as Chad.

Next, he will be appearing in the movie, A Christmas Set Up as Hugo. He will be portraying the character of the New York-based lawyer.

Apart from being an actor, he is also a writer. As a writer, he has contributed his scripts to the shorts; Zero Recognition, and Apart From Everything. Also, he happens to be the director and producer of the shorts.

Ben Lewis has brown eyes with brunette hair. He stands at a height of 5 feet 9 inches and has a decent weight.

Talking about his appearance, he has a charming persona with an oval-shaped facial structure. Apart from that, he prefers to have slightly grown facial hair.

Till the date, he has not been part of any sort of controversy and scandal that created a buzz in the media. Besides that, he has managed to maintain distance from any type of rumors.

You may also read the bio of Oliver James, Michael Cassidy, and Joshua Bassett.

Music and the entertainment industry: Its various benefits explained!