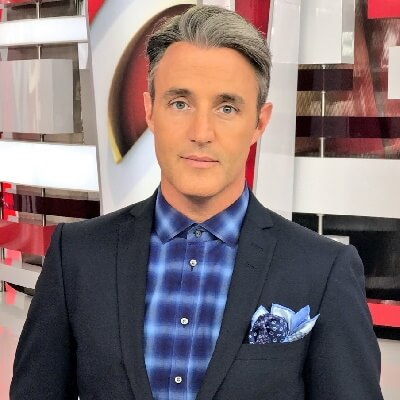 Ben Mulroney is a married man. He is married to Jessica Mulroney. She is a Canadian fashion stylist famous for her previous work with Kleinfeld Bridal, guest appearances on Good Morning America and CityLine, and the host of I do, Redo.

The couple started dating in 2006. After a year of dating, they got engaged on December 28, 2007, in Montreal. After less than a year, the couple exchanged wedding vows on October 30, 2008, in a private ceremony at St. Patrick’s Basilica, Montreal.

From their marriage, they have three children. On August 12, 2010, Jessica gave birth to fraternal twins sons, Brian Gerald Alexander Mulroney and John Benedict Dimitri Mulroney. On June 12, 2013, she gave birth to their third child, a daughter named Isabel Veronica Mulroney.

Jessica is very close to Meghan Markle and the couple attended the 2018 Royal wedding of Prince Harry and Meghan and their three children participated as bridesmaid and page boys.

Who is Ben Mulroney?

Ben Mulroney is a Canadian TV host famous for hosting ‘ETalk’ and the weekend edition of ‘Good Morning America’. He is also famous as the oldest son of former Canadian Prime Minister Brian Mulroney.

Ben Mulroney was born as Benedict Martin Paul “Ben” Mulroney on March 9, 1976, in Montreal, Quebec. As of 2020, his age is 44. He was born to Brian Mulroney (father) and Mila Pivnicki Mulroney (mother). His father, Brian is a Canadian politician who is known for serving as the 18th Candian prime minister from September 17, 1984, to June 25, 1993. His tenure as the prime minister of Canada was marked by major economic reforms including the Goods and Services Tax and the Canada-U.S. Free Trade Agreement. Prior to entering politics, he was a lawyer and businessman in Montreal. His mother, on the other hand, was notable for taking on a greater role during Brian’s tenure compared to previous spouses of Canadian prime ministers and for her criticism of lavish spending habits.

Ben is one of his parents; four children. He has an elder sister named Caroline, and two younger brothers named Mark and Nicolas. Caroline currently serves as the Ontario Minister of Transportation and the Ontario Minister of Francophone Affairs. Both of his younger brothers, Mark and Nicolas work in the financial industry in Toronto. He spent his childhood days in Ottawa, Ontario.

His ethnicity is Irish-Canadian, Serbian.

Talking about his educational background, he went to the Hotchkiss School where he earned a Bachelor of Arts degree, with a major in history, from Duke University. Subsequently, he also received a Bachelor of Laws degree from Université Laval.

Ben Mulroney is best known for his work as the host of the entertainment news program, ‘etalk’. In the show, he covers major events in entertainment, including the Golden Globes, the Oscars, and the Juno Awards. Moreover, he also hosts Canadian Idol. From 2001 to 2002, he served as an entertainment reporter on Canada AM.

In April 2009, he became a radio show host with the launch of the CHUM Radio show, ‘etalk’ 20. It is a two-hour radio program that is broadcast on 11 radio stations all across Canada and counts down the top 20 chart-topping hits including celebrity interviews.

In February 2010, ‘etalk’ covered the Vancouver 2010 Olympic Winter Games for CTV. Ben was appointed as the National Ambassador for UNICEF Canada in 2006.

In June 2012, he joined ABC News as a contributor to Good Morning America. Since 2016, he has served as the co-host of CTV’s new morning show ‘Your Morning’ with Anne-Marie Mediwake.

Mulroney has brown hair and a pair of green eyes. He stands at a height of 6 feet 1 inch. There is no information about his weight.

Ben Mulroney has an estimated net worth of around $10 million. He has earned a good amount of fortune from his career as a TV host. Although he has not revealed his salary, a TV host earns around $60k per year on average.

You may also like to read the Bio, Career, Body Measurements, Net Worth, Social Media, Relationships, and more about Éric Bruneau, Max Walker (Canadian Actor), Deyjah Harris, and more.

Jessica Mulroney, 40, Meghan Markle’s former best friend returns to social media and talks about her fear to come out of the house after her racism row!