Ben Roethlisberger is married to Ashley Harlan since July 23, 2011. 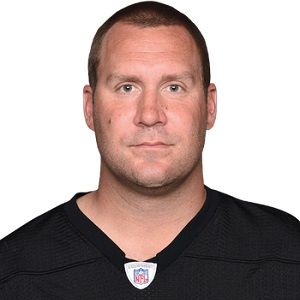 I try to live my life like my father lives his. He always takes care of everyone else first. He won't even start eating until he's sure everyone else in the family has started eating. Another thing: My dad never judges me by whether I win or lose.

Leadership is something you earn, something you're chosen for. You can't come in yelling, 'I'm your leader!' If it happens, it's because the other guys respect you.

Who is Ben Roethlisberger?

Ben Roethlisberger is a two-time Super Bowl winner. Benjamin’s nick is Big Ben and he is a quarterback for the NFL.

Presently, the veteran footballer ranks an all-time 9th in the NFL.

Ben was born on March 2, 1982, in Lima, Ohio, United States. He is 39 years old. His father is Kenneth Todd Roethlisberger and his mother is Ida Jane Foust and they belong to Anglo-Swiss-German ancestry.

Ben at Findlay High School in Findlay, Ohio, where he was captain of the football, basketball, and baseball teams.

Right from the beginning, he had a keen interest in football and began to play at a very early age. He graduated from Miami University in which he played for three seasons from 2001-2003.

Ben began his football career at the college level where he played for Miami Redhawks from 2001-to 2004.

During his college career, Ben broke quite a few records which include most pass attempts, most pass completions in a season and career, and most passing yards.

He was selected 11th overall in the 2004 NFL Draft by the Pittsburgh Steelers. On August 4, 2004, he signed a six-year contract worth $22.26 million in salaries. As a rookie, he began his career as the No. 3 quarterback along with Tommy Maddox and Charlie Batch.

During the season, his passer rating of 22.6 was the lowest in Super Bowl history by a winning quarterback. In Week 1 of the 2008 season, he made a personal pass record in which he completed 13 of 14 passes for a career-high 92.9 completion percentage. Moreover, he finished with 137 yards passing and two touchdown passes in the 38–17 win against the Texans.

In the same season, he became the Super Bowl champion for the second time. In Super Bowl XLIII, the veteran American footballer finished 21 of 30 for 256 yards, one touchdown, and one interception with a passer rating of 93.2. Additionally, he made his third Super Bowl start against Green Bay Packers in which Steelers lost the game 31-25.

Ben completed the game 25/40 for 263 yards, 2 touchdowns, and 2 interceptions. Recently, Ben threw a career-high five interceptions against the Jacksonville Jaguars as the Steelers lost by a score of 30–9 on October 8, 2017. Besides this, he also set an NFL record for the most completions i.e. 44 completions in a non-overtime game.

Back in 2010, Ben faced controversy after a girl said Ben raped her in the club bathroom. The 20-year-old victim told the police, “Ben asked me for sex, I told him I wasn’t ok, and he then had sex with me.”

However, the reports suggested that, when she was questioned about the incident, she said: “No, I did not know what was going on, Well, I’m not sure.”

Ben is quite active on social media such as Facebook and Twitter. He regularly posts photos and videos on his social accounts. Currently, he has more than 359k followers on Twitter and around 442k followers on Facebook.

You may also want to read about other players, their life, and biographies. Here are some Josh Donaldson and Cody Bellinger.