Ben Simmons is a professional Australian basketball player. He is probably single. 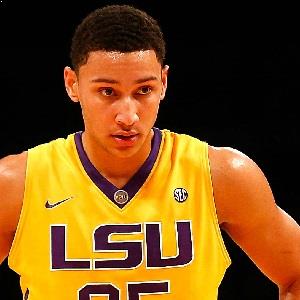 I was in school to play basketball

I wasn't trying to be a doctor. It's hard to talk about the NCAA rules and everything that happened in the past because I've just been focused on practicing and getting ready... I was trying to reach my dreams, and that's to play in the NBA.

LeBron's been like a big brother to me, watching me play and giving me pointers on just little things. I really look up to him.

What is the relationship of Ben Simmons?

Ben Simmons likes keeping information regarding his love life private. He has seldom spoken about his past or present relationships in any of his interviews.

He was believed to be dating Brittany Renner in 2016. He was also briefly seeing Amber Rose in early 2017. He was spotted with Dylan Gonzalez since June 2017. But nothing has been officially stated about this relationship.  He is probably single at the moment. He has no children out of any of these relationships.

Who is Ben Simmons?

Ben Simmons is a professional Australian basketball player who currently plays as forward for Philadelphia 76ers of the National Basketball Association (NBA). He is in the Australian national basketball team.

He belongs to a mixed ethnicity of Australian and African-American. He started playing basketball since he was seven years old. He previously also played Australian rules football at junior level.

Ben attended Monterey Academy in Montverde, Florida, Box Hill Senior Secondary College. He also played college basketball for one season for Louisiana State University (LSU). Ben was raised in Newcastle and while he was there, he played basketball for Newcastle Hunters’ under-12 representative team. He also played rugby league for the Western Suburbs.

Ben initially started his career in basketball after he attended Montverde Academy and started playing for them. He later returned to Melbourne to join Bulleen Boomers of the Big V competition. After his active successful involvement in the game, Ben started playing basketball in his senior years for Louisiana State University. Immense success during his junior and senior years persuaded Ben to get involved in Basketball more and hence on 13 November 2015, he made his college debut in LSU’s season opener.

Ben’s professional career as a Basketball player began after he was signed by Philadelphia 76ers on 23 June 2016. His presence in the court was praised by many in his initial games. He suffered an injury, fracture of the fifth metatarsal bone of his right foot on 30 September 2016 and hence was estimated to miss three to four months.

Ben has also represented the Australian National team multiple times. He first made his senior team debut in the 2013 FIBA Oceania Championship.

Ben was involved in a rumor that his agent Rich Paul, might not want his client to play at all for the Philadelphia 76ers in 2016 due to his injury. His leaving of LSU was also a part of a controversy for a while. He was also criticized for his performance in NBA and his skills were often questioned by many.

Ben is 6 feet 10 inches tall. His weight is 108 kg. He has black hair and eyes. His shoe size and dress size are unknown.