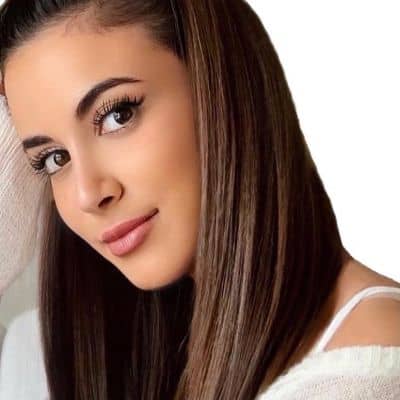 Talking about her love life, Benedetta Caretta is presently single and is not dating anyone at the moment. However, her relationship status is suspected. Caretta is rumored to be dating the Croatian cellist Stjepan Hauser. They have shared good bonding on and off the screen.

Many fans think they are dating each other. However, Caretta and Hauser have not disclosed anything yet. Previously, she has been linked with a guy named Alberto Urso. The rumored lovers exchanged their passion for singing.

Alberto is the winner of the 2018 edition of Amici di Maria De Filippi. Unfortunately, there is no evidence of their dating.

Who is Benedetta Caretta?

Benedetta Caretta is a well-recognized Italian singer, songwriter, social media personality, and YouTube star. Caretta is widely famed for her duet with Croatian cellist Stjepan Hauser and also for her participation in ‘IoCanto’.

Moreover, she also participated in The Voice and was a part of Raffaella Carra’s team.

Benedetta Caretta was born on 01 July 1996. At present, her age is 25 years old. Likewise, her birthplace is Carmignano di Brenta, Italy.

Not much known about his father and mother’s details, Benedetta has been secretive towards her parent’s information. Moreover, she has not revealed any of her sibling’s details in the public yet.

Talking about her nationality, Caretta holds an Italian identity whereas her ethnicity is Italian.

Regarding education, the star studied linguistic in high school and her first musical experience was her participation in a program that allowed her to win a scholarship for the New York Film Academy.

The singer, Caretta started her singing journey from her childhood at the age of five. She sang the Ave Mario solo at the wedding of the parish choir director. Initially, she also attended the Gioventu In Cantata choir in Marostica, directed by Cinzia Zanon. Following this, Benedetta became a part of the choir until 2009.

Benedetta is best known for her duets with the Croatian cellist Stjepan Hauser. They exchange their duets on their respective Instagram accounts. The duo has performed songs by several renowned artists such as Camila Cabello, Celine Dion, Christina Aguilera, and Andrea Bocelli.

Caretta and her fellow mate have performed such as My Heart Will Go On, I Will Always Love You, Endless Love, Vivo per Lei, Andrea Bocelli, Say Something, and so on. Likewise, the singer also created her personal YouTube channel named Benedetta Caretta and it has more than 347k subscribers at the moment.

Some of her highly viewed videos on her channel are Always Remember Us This Way, My Heart Will Go On, Halo, Never Enough, Cover Benedetta Caretta. Benedetta also competed in The Voice and was a part of Raffaella Carra’s team. At that time, the singer was 17 years old. She got an opportunity to share the stage with Michael Buble as well.

A talented Italian singer, Caretta has earned a handsome amount of money. She has been active in her profession from the year 2001 till the present.

It is reported that Benedetta Caretta has an estimated net worth of $500k-$1 million.

However, the prominent singer has not disclosed her exact salary, earnings, and assets details till now.

A controversy appeared when the singer shared an old video clip of her performance with Michael Buble. Some people mentioned the change in her physical appearance. Likewise, some pointed out that she might have done nose surgery.

While others commented she is as good with her voice as before. Therefore, her appearance does not matter anymore.

Other than that, Caretta has never been part of any controversial matter or rumors till now. It seems that Benedetta prefers enjoying her personal life and does not want to merge it with her professional life.

25 years old singer, Benedetta has gorgeous looks and an admirable personality. She stands at a height of 5 feet 7 inches. Also, she has a balanced bodyweight of 60 kg.

Furthermore, Caretta has dark brown eyes whereas her hair is brown. Her body measurement is 36-28-40 inches(chest-waist-hip) respectively.

Regarding her social media presence, Benedetta Caretta is an active personality on social media. Benedetta has more than 624k followers on her official Instagram account @benedettacaretta.

She is also active on Twitter with around 1k followers. The star owns a YouTube channel named Benedetta Caretta and it has more than 347k subscribers at the moment.

Moreover, Caretta is also available on Facebook with nearly 1.13 million fans and supporters.