Benjamin Bratt’s relationship status at present is married. He exchanged vows with Talisa Soto on 13 April 2002 in San Francisco.

His wife is an actress and they first met in the year 1993. Then from 2001, they started to date each other.

This couple is blessed with two children. Their daughter is Sophia Rosalinda Bratt (b. Dec 2002) and their son is Mateo Bravery Bratt (b. Oct 2005).

Benjamin from 1990 till 1996, had an affair with filmmaker Monika McClure. He then romanced with actress Jennifer Esposito for a year in 1996.

His love life with Julia Roberts was much discussed. They started to date in and were together for three years till 2001. 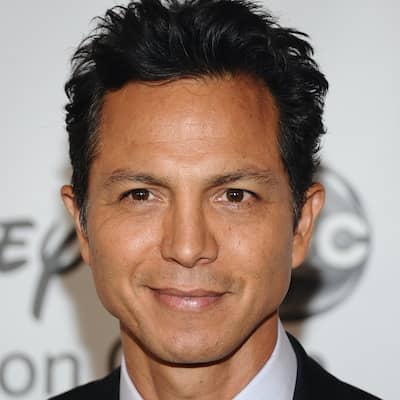 My family is like a sanctuary to me. I always turn to them for support and strength. I take comfort in knowing no matter which path I choose, my family stands behind me

It takes some kind of fortitude for someone like my mom to single-handedly raise five children, get them through college, and keep them out of jail.

Who is Benjamin Bratt?

Benjamin Bratt is a popular American actor, producer, and activist. He is popular for his acting skills in Bright Angel (1990), Blood In Blood Out (1993), Demolition Man (1993), and more

His upcoming TV Mini-Series DMZ is filming in which he is laying the role of Parco Delgado.

His birthdate is 16 Dec 1963 and he was born in San Francisco, California, the US as Benjamin George Bratt. The information of his mother was Eldy Bratt and his father was Peter Bratt Sr.

His mom was a Nurse/Activist while his dad was a metal worker.

Benjamin’s ancestry is a mix of German-English-Indigenous Peruvian Quechua and has an older brother, Peter Bratt. He also has three sisters.

Regarding his academics, he first studied at Lowell High School and then went to the University of California to study BFA.

Then he enrolled at American Conservatory Theater but left his MFA to start the career.

Benjamin Bratt is a popular face of the entertainment world. Till now, he has shown his acting skill in several movies as well as TV shows.

By the recorded reports of 2022, he has accumulated a net worth of around $12 million US. The salary of him is behind the curtain.

This Miss Congeniality famed actor is keeping himself away from rumors and desperate scandals.

Benjamin Bratt’s height is 6 ft 2 inches and his body weight is 80 kg. In addition, he has dark brown eyes and his hair is in black color.

A family man and a successful actor Benjamin Bratt! Is his family the setback in his career? Also know more about his career!!