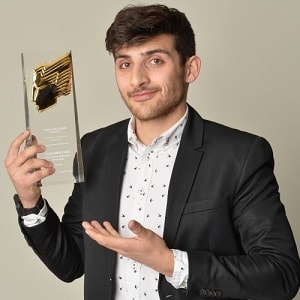 What is the relationship of Benjamin Zand?

Benjamin Zand is dating VICE News journalist Isobel Yeung. They officially announced their relationship in 2018 via their Instagram accounts.

Who is Benjamin Zand?

Benjamin Zand is an Iranian-British journalist and filmmaker for the BBC and he makes documentaries for different BBC channels and is the head of a BBC documentary team, ‘BBC Pop Up’.

He was born on February 2, 1991, in Liverpool, U.K. He is 27 years old. Benjamin holds British citizenship and his ethnicity is Iranian. He has not revealed information regarding his father, mother, siblings, and about his childhood.

He started a travel website and began video production during university. Benjamin released his first documentary, ‘Tehrangeles’ in which Iranians were featured living in L.A. He became a producer at the BBC World Service after his studies and worked on numerous radio programmes and also worked in BBC ‘World Have Your Say’. He shifted to BBC World News after a year as a producer and social media manager of BBC Facebook pages.

Benjamin worked as a video journalist and served as a reporter for BBC News and took part in the BBC’s video innovation lab. He used to cover stories from far-right ultranationalism to Native Americans in South Dakota. He then started working for the BBC’s ‘The Travel Show’ and started BBC’s ‘mobile bureau’ called ‘BBC Pop Up’ with a BBC colleague towards the end of 2014 where he traveled across the US and made documentaries for BBC World News and BBC News.

Currently, he works as the Editor of BBC Pop Up and a producer and filmmaker for BBC Two, BBC Three, and Panorama in which he makes current affairs documentaries.

He was awarded Young talent of the Year at the 2016 Royal Television Society Journalism Awards for his originality, versatility, and for his creativity.

He is secretive about his personal information. He has not provided any data about his salary and net worth. However, it is under review.

He has been successful to keep his lip-tight in his personal life as well as in his professional life. So, no rumor, controversy, and scandal are heard about him till now.

He has got black hair and black eyes. Other information about his height, weight, etc. are unknown.