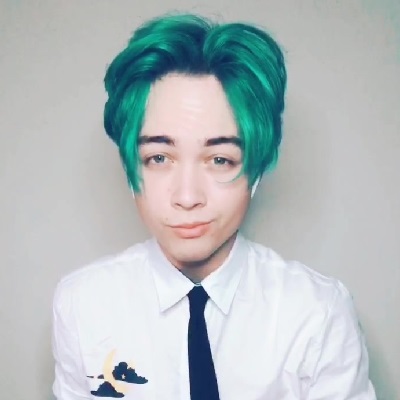 Benkro_tv is in a relationship. However, the name or details of his love interest is unknown. He likes to keep his personal life quite secret. However, on the 18th of January 2020, he uploaded a photo of his along with his girlfriend.

His Instagram post suggests that he likes to spend his days with his squad that includes the fellow YouTuber and TikTok star, Cap_SavBoy.

Besides that, he loves to wear scary makeup and printed masks.

American Benkro_tv is a TikTok Star and YouTuber. He is famous for his TikTok videos that went viral on the web.

He is also a gamer and steamer too.

He was born Damiar Krogh on the 22nd of April 1997 in Chicago, Illinois. He is of Caucasian ethnicity.

To date, he has not shared any details for his father, mother,  and education. However, his father has appeared in one of his TikTok videos.

He has an elder brother.

The very first TikTok video that he uploaded was funny. In the video, Benkro_tv was having a funny moment with his elder brother which went viral within no time with 28k views and 3.1k likes. At the time, he was familiar with the app.

However, those views and likes inspired him to make the second video where he is thanking his followers. Soon the TikToker started getting uploading more and more videos.

Unlike any other TikTok videos, he uploads videos of his regular life which makes it interesting and seems more originals. The contents gripped the attention of many viewers. Most of the time, he makes videos when he is playing computer games.

As of now, in his TikTok account, he has 1.5 million followers. In the course of making videos, he has collaborated with Xowie Jones and Noen Eubanks.

The TikTok star is also a YouTuber. He created his YouTube channel on the 23rd of April 2016.

Through his career as a social influencer, he has made a net worth of $1 million-$5 million.

Besides that, he makes money through his YouTube videos and merch too.

Benkro_tv has blue eyes with brown hair. However, he likes to change his hair color frequently, Green being his favorite hair color. Details about the height and weight are not disclosed yet.