Known for appearing in Ugly Betty, Animaniacs, The Good Fight, and more. 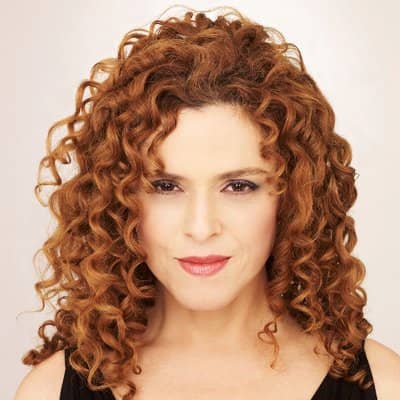 I feel strongly for gay marriage to be accepted

You've got to be original, because if you're like someone else, what do they need you for?

Bernadette Peters’s relationship status at present is possibly single. She once exchanged vows with Michael Wittenberg on 20 July 1996.

But this wedding ended on 26 Sep 2005 as her husband passed away in a helicopter crash. He was an investment adviser and was on a business trip when he said goodbye to the world.

Bernadette from 1977 till 1982, was in a romantic relationship with Steve Martin (comedian). She also has a brief fling with actor-director Warren Beatty.

Who is Bernadette Peters?

Bernadette Peters is an American actress who is also a singer. She is known for appearing in Ugly Betty, Animaniacs, The Good Fight, and more.

She is an author who has written children’s books titled Dewey Doo-it Helps Owlie Fly Again, Broadway Barks, Stella is a Star and more.

Her birthdate is 28 Feb 1948 and the place she was born in New York City, the US. The name of her mother was Marguerite Maltese plus her father’s name was Peter Lazzara.

Similarly, Bernadette’s ancestry is Italian and has an older brother named Joseph Lazzara. Her older sister Donna DeSeta is a casting director.

As per her academics, she attended Quintano’s School for Young Professionals.

Bernadette Peters has become a popular face of the acting world where she made several screen appearances. Her first movie is Ace Eli and Rodger of the Skies that was released in 1973.

Her TV credits are,

By the records of 2021, she has a net worth of around $40 million (estimated). The yearly salary and other earnings of her are not disclosed.

This talented actress/author is keeping herself away from rumors and desperate scandals.

Bernadette Peters’s height of 5 ft 3 inches and her body weight is 58 kg. Also, she has dark brown eyes and has natural dark brown hair.

She mostly dyes her hair in blonde, auburn, plus light brown colors.