While her past relationship hasn’t been disclosed, however as per now, Behrs is in a relationship with Michael Gladis. Gladis who is an actor and producer and Beth Behrs are together since June 21, 2010. The duo got engaged on July 10, 2016, after the six years of relationship. Whether the couple is expecting to have a baby is still to be unleashed but the happily engaged couples are certain to shift to marital relationship very soon. 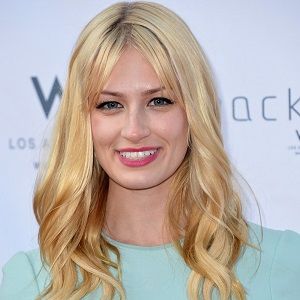 I prefer to drink my salad to get veggies and other nutrients throughout the day, so smoothies are a staple of my day-to-day diet. They taste delicious even when they are packed with spinach, kale, and healthy superfoods

Self-care equals success. You're going to be more successful if you take care of yourself and you're healthy

Some people love to run, and it's therapy for them, and some people can't stand it. And I just feel like there's so much in our society where you're judging yourself based on what you think you need to do.

Who is Beth Behrs?

Beth Behrs is an American-born artist who is notable for her singing and fabulous acting. Among a number of shows, she is best known for the sitcom ‘2 Broke Girls’ in which she is playing the role of Caroline Channing.

Talking about her early life she was born on December 26, 1985, in Pennsylvania, a few years later her family moved to Virginia, where she spent her childhood. She grew up with her sister who is six years younger than her. In her early childhood, she held an interest in acting. At the age of four, she began doing a performance in the theater. She joined E.C. Glass High School and completed her education from it.

Later in 2001, she attended Tamalpais High School following her acceptance into the drama program at high school. Since then Behrs knew she wants to make her career in theater. Then after, she moved to San Francisco to study at the American Conservatory Theatre and went on to perform in Dangling Conversation. After the completion of study at American Theatre, she again attended UCLA School of Theatre, Film, and Television to bolster her theatrical aptitude for a better career.  Later she graduated with earning the award, Young Musician’s Foundation Vocal Scholarship.

She started her career when she got her first notable role in the film ‘American Pie Presents: The Book of Love’. The movie was a huge success and its success added Behrs to some other films in the pipeline. After the movie, she played in an independent comedy, Adventures of Serial Buddies. As her movie gained popularity after back-to-back hits, Behrs also tasted the heyday of her career. She again starred in the independent film, this time as an alien girl in Route 30, Too!

A year later, she shifted to make her career on television. She appeared on ABC’s Castle and NCIS: Los Angeles. However, her major television career breakthrough occurred only after landing the lead role in the CBS sitcom ‘2 Broke Girls. The series is still rocking high and just in 2016, it was renewed for a 6th season. From theater to the movie and now a lead role in a prominent sitcom, Behrs has achieved huge success in her career. The actress has often been nominated for her role in movies and television series.

The talented actress, Beth Behrs has an estimated net worth of $6 million as of 2022, and her salary is not revealed.

While as of now she is well established in her acting career, before landing the role for the 2 Broke Girls, she worked as a nanny. This job of her did bring controversies about her but later silenced as she succeeded to bag the leading role in the sitcom.

Also get to know more about the birth facts, education, career, net worth, rumors, height, and social media of different personalities like Sarah Litzsinger, Kim Basinger, and Anthony Ramos.