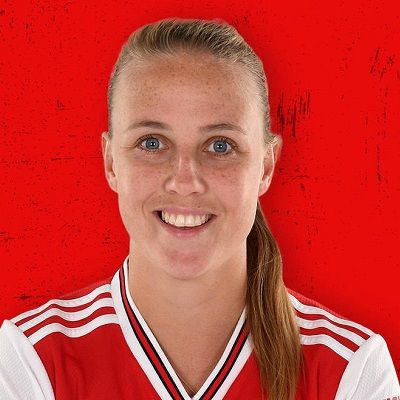 Beth Mead is currently single. The personal preference of Beth is a gay relationship.

Previously, she was in relationship status with Danielle van de Donk. Danielle is a Dutch professional women soccer player.

She likes hanging out and getting clicked with her friends and family.

Who is Beth Mead?

Beth Mead is an English Footballer. Beth plays as a forward for Arsenal and the England National Team.

Recently on 8th October 2019, her goal salvaged a win for England against Portugal.

Bethany Jane Mead was born on 9th May 1995 in Whitby, England. Bethany is of Anglo-Scottish ancestry.

She graduated with a degree in Sports Development from Teesside University in Middlesbrough, Teesside.

She started her career at California Girls FC and later joined Middlesbrough F.C.

Similarly, she entered the FA Women’s Premier League and in the first season, she scored 23 goals. She ended the season with 29 goals in all competition and scored 30 goals in the 28 matches of next season.

On 24th January 2017, she signed an undisclosed-length full-time deal with Arsenal Ladies.

She reinvented herself as a versatile winger by the 2018-19 season.

She represented England at an early age of 15 and played in all three England under-20 matches at the 2014 FIFA U-20 Women’s World Cup.

Similarly, in April 2018, she made her debut for the senior England women’s national football team as a substitute in a 0–0 2019 FIFA Women’s World Cup.

In September 2018, she started her first match scoring twice in England’s 6–0 win over Kazakhstan in Pavlodar.

She promotes NIKE brand on her social media which suggests that she has signed an endorsement deal.

Beth is blue-eyed-blonde. She is 5 feet 4 inches tall and weighs around 59 kg.